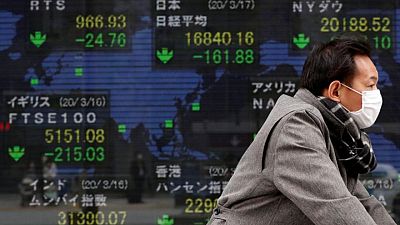 LONDON – A flare up in U.S.-China tensions, signs of further regulatory crackdowns from Beijing and a rise in short-dated U.S. Treasury yields doused the equity market rally on Wednesday, offsetting tailwinds from forecast-beating earnings on Wall Street.

MSCI‘s global equity benchmark is hovering close to Monday’s seven-week high and is on track for the best month in almost a year.

However, European stocks softened, led by a 1.6% drop in mining and resource firms. Bank shares also slipped, with Deutsche Bank down more than 5% despite forecast-beating earnings .

“We have good U.S. data in earnings which is very reassuring but valuation is very stretched in both the value as well as the growth sector,” said Sebastien Galy, senior macro strategist at Nordea Asset Management.

“And people are also getting a bit hesitant and are a bit worried because the amount of money that is going through will slow down with the Fed slowly starting to taper – but that is not necessarily a bad thing.”

Earnings reports from Ford, Coca-Cola, McDonald’s and Boeing are due later in the day.

Concern over more tension between Beijing and Washington weighed on markets too, after the U.S. Federal Communications Commission voted to revoke the authorization for China Telecom’s U.S. subsidiary to operate in the United States after nearly two decades, citing national security.

Currency and bond traders were looking to a slew of central bank meetings over the coming week for guidance.

Canada is first up at 1400 GMT on Wednesday while the European Central Bank meets on Thursday, when the Bank of Japan also concludes its two-day meeting.

No changes are expected from Tokyo, but traders are expecting the ECB to push back on market inflation forecasts and are looking for hawkish clues from the Bank of Canada as prices put pressure on rates.

Policymakers are facing a steady drip of evidence that there is no let-up from pressure on consumer prices.

The Australian dollar jumped after the data but soon pared the gains.

The ebbing risk sentiment meanwhile pushed up the safe-haven Japanese yen which rose 0.4% against the U.S. dollar though the greenback in turn held just off a one-week high versus a currency basket.

In fixed income markets, focus was on U.S. short-term Treasury yields which broke briefly above the 0.5% mark for the first time in 19 months. That caused the Treasury yield curve to flatten, as the possible timing of the Fed’s first interest rate rise came into tighter focus.

The Fed has all but confirmed it will soon start to whittle back its asset purchases, though has said that shouldn’t signal that rate hikes are imminent. Nevertheless, Fed funds futures are priced for a lift-off in the second half of next year.

“The inflation overshoot has been persistent,” they said. “There is (only) so much the Fed can tolerate before reacting … it feels inevitable that that conversation will be brought up more and more as we go into next year.”

Traders are also watching for the half-yearly update on UK public finances and economic outlook from the finance minister, who is expected to set out tighter budget plans and put Britain on course to become the first big economy to undergo a two-pronged withdrawal of fiscal and monetary stimulus.

Sterling was down 0.3%, trading at its weakest in over a week ahead of the announcement.