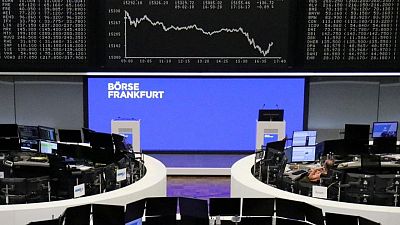 Asian tech stocks slid on the back of a spike in short-term U.S. Treasury yields and new regulatory concerns in China even as a batch of upbeat earnings reports lifted Wall Street to record highs on Tuesday. [MKTS/GLOB]

Traders are now focused on the European Central Bank (ECB) meeting on Thursday, where policymakers are expected to keep interest rate unchanged and push back on market inflation forecasts.

“After such strong highs we have seen on indices, I’m not surprised that we see a kind of breather today ahead of the ECB meeting,” said Roland Kaloyan, head of European equity strategy at SocGen.

“The ECB will remain accommodative, but again, you always have the risk that any message or any word could be misunderstood or misinterpreted by the market.”

Euro zone inflation expectations surged to a new seven-year high on Tuesday, shooting past the ECB‘s target of 2% on the back of soaring energy prices and supply chain crunches. That is expected to put pressure on the central bank as it considers how much support to provide the bloc’s economy once its pandemic bond-buying expires next March.

However, the STOXX 600 is on track to end October with gains, as stronger-than-expected quarterly results counter concerns about inflation, global energy crunch and looming central bank actions.

Germany’s Puma inched up 3% after hiking its 2021 sales outlook even as it cautioned that a lockdown in Vietnam, port congestion and container shortages were hurting its supply chain.

Swiss software specialist Temenos surged 9.0% after a report that buyout firm EQT AB was in the early stages of considering a bid for the firm.