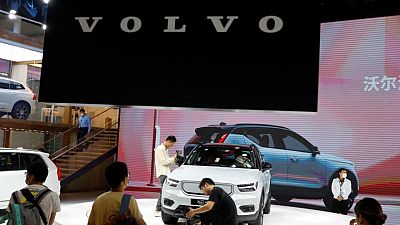 STOCKHOLM -Volvo Cars, owned by Chinese automaker Geely, cut the size of its initial public offering on Monday, setting the price for the listing at 53 crowns per share, the low end of its previously announced range.

Volvo had previously said the shares would be priced within a range of 53 crowns ($6.2) to 68 crowns per share, but the market for European IPOs has taken a turn for the worse in recent months as inflation and global supply chain crunches have increased stock market volatility.

Automakers have been particularly hurt by production disruptions due to a semiconductor shortage as several of them cut production targets and shut factories on concern that the crisis will run well into next year.

At the current price, Volvo Cars would be valued at just over $18 billion, down from as much as $23 billion it had expected at the top of the pricing range.

Volvo Cars said on Monday it was planning to raise around 20 billion Swedish crowns ($2.3 billion) in the IPO, down a fifth from its previous plans.

European and U.S. IPO markets have been hit by a slew of cancellations recently, while many more companies are believed to have pushed their plans back behind the scenes.

Volvo Cars and its Chinese owner had tried to go public a few yeas ago but abandoned those plans in 2018 blaming trade tensions and a downturn in automotive stocks.

Political tension between China and Sweden still persist after Stockholm banned Huawei from its 5G networks and Swedish companies like Ericsson have lost business in the Asian country.

Geely, which paid Ford Motor Co $1.8 billion for Volvo in 2010, would not exercise an over-allotment option, while the amended offering would result in a free float of between 16.0% and 17.9%.

Volvo said the first day of trading on Nasdaq Stockholm was expected on Oct. 29, one day later than it had previously announced.