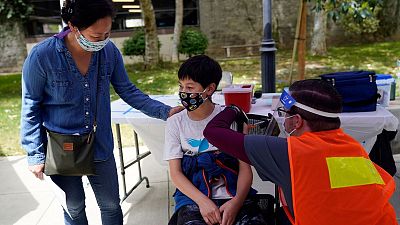 Children-size doses of Pfizer’s COVID-19 vaccine appear safe and nearly 91% effective at preventing symptomatic infections in 5-to 11-year-olds, according to details of a study released on Friday.

The study tracked 2,268 kids in that age group who received two shots three weeks apart of either a placebo or the low-dose vaccine. Each dose was one-third the amount given to teens and adults.

Researchers calculated the low-dose vaccine was nearly 91 per cent effective, based on 16 COVID-19 cases in youngsters given dummy shots, versus three cases among vaccinated children. There were no severe illnesses reported among any of the youngsters, but those vaccinated had much milder symptoms than those who had not been vaccinated.

In addition, young children given the low-dose shots developed coronavirus-fighting antibody levels just as strong as teens and young adults who got regular-strength vaccinations.

The full study has not yet been released but details of it were in a new document posted ahead of a key meeting of the US Food and Drug Administration's vaccine advisers.

So when will young children get vaccinated in Europe?

The European Medicines Agency (EMA) has already started evaluating an application from Pfizer to extend the use of their COVID-19 vaccine for children aged 5 to 11.

The EMA’s human medicines committee will review the data on the vaccine, in order to decide whether to recommend extending its use. This committee’s opinion will then be forwarded to the European Commission, which will issue a final decision.

The EMA will communicate on the outcome of its evaluation, which they said in a press release on Monday “is expected in a couple of months unless supplementary information is needed”.

The decision whether to follow that advice will then be up to each individual EU member state.

There has been a debate over the merits of vaccinating children, particularly those under the age of 12 who do not have underlying conditions, as the chances of them developing a severe illness from COVID-19 are quite low, and this has to be balanced against the potential side effects of the vaccine.

Pfizer’s study of younger kids found the low-dose shots proved safe, with similar or fewer temporary side effects such as sore arms, fever or achiness that teens experience.

The study is not large enough to detect any extremely rare side effects, such as the heart inflammation that occasionally occurs after the second dose, mostly in young men.

Pfizer and Moderna are studying even younger children, as young as 6-month-olds. Results are expected later in the year.

'No way to sugarcoat this': Vaccine equity still way off, WHO says