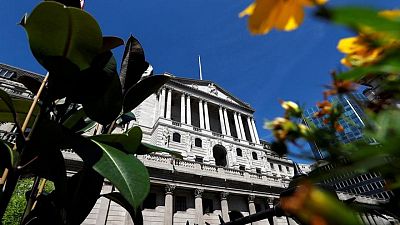 – The Bank of England’s new chief economist, Huw Pill, said inflation in Britain could surpass a “very uncomfortable” 5% and the question of whether to raise interest rates was a “live” one at its early November meeting, the Financial Times reported.

Pill told the newspaper in an interview published on Thursday that the decision facing the Monetary Policy Committee was “finely balanced” and added: “I think November is live.”

“I would not be shocked — let’s put it that way — if we see an inflation print close to or above 5% (in the months ahead). And that’s a very uncomfortable place for a central bank with an inflation target of 2% to be,” he said.

Financial markets have priced in a 15-basis-point rate hike by the BoE on Nov. 4, which would make it the first of the world’s biggest central banks to raise borrowing costs since the COVID-19 pandemic struck in early 2020.

The BoE has previously said inflation is likely to go above 4% and since it made that forecast, energy prices have risen further. Furthermore, Britain’s economy is close to regaining its pre-pandemic size, although the pace of its recovery has slowed.

“The big picture is, I think, there are reasons that we don’t need the emergency settings of policy that we saw after the intensification of the pandemic,” Pill told the FT.

But the newspaper quoted him as suggesting that rates would not need to move much higher than their pre-pandemic level of 0.75%.

“We do not see, given the transitory nature of what we’re seeing in inflation in our base case, a need to go to a restrictive (policy) stance,” he said.

BoE Governor Andrew Bailey also said on Sunday that the rise in inflation was still likely to prove transitory but that the British central bank would have to act to contain the risks.

Pill told the FT he did not see wage rises at the moment that were threatening to cause inflationary concerns.