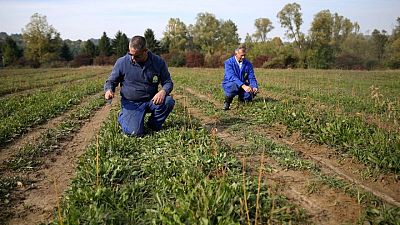 TUZLA, Bosnia – Fast-growing willow trees may soon become a regular feature of parts of the Balkan landscape if a pilot project at decommissioned coal pits in Bosnia and Serbia, aimed at helping the countries’ transition to cleaner energy, bears fruit.

Able to grow up to two centimetres (one inch) a day, the willows quickly reach harvestable height and can be burned alongside coal in thermo-power plants.

“We planted 14,000 willows on one hectare (2-1/2 acres) of land,” said Izet Cickusic, a member of a team from Bosnian power utility Elektroprivreda (EPBiH) working at the Kreka mine in the northern town of Tuzla.

“We have identified a total of 450 hectares which could be re-cultivated for that purpose.”

Kreka, where the first willows were planted in May but have remained stunted due to a summer drought, is EPBiH’s largest coal mine, but just three of its original 12 pits are still in operation.

The trees were planted manually at a closed pit by around 50 miners who would otherwise have been made redundant. The first harvest is expected after three years, and then every other year over the following 25.

Bonnie Norman, president of EPBiH’s U.S. partner in the project, E3 International, said the trees were known as “energy willows” because their heat value is greater than the brown coal, or lignite, that is typically burned in Bosnia and neighbouring Serbia.

“You can co-fire it at up to 20% within existing coal boilers… It reduces the components of smog,” she added.

EPBiH has identified suitable areas at two of the utility’s seven mines for testing the willows.

Across the border, where the trees are known as “Serbia’s oil”, E3 International – which is funded by the Austrian Development Agency – has planted the willows at four sites, including a landfill and a coal mine.

Serbia, which like Bosnia does not plan to exit coal until 2050, currently generates two thirds of its electricity in ageing coal-fired power plants.

“If we use a total of 75,000 hectares (for willows), that can replace 10% of Serbia’s coal-made energy …(as) part of the portfolio of (energy) solutions,” Norman said.