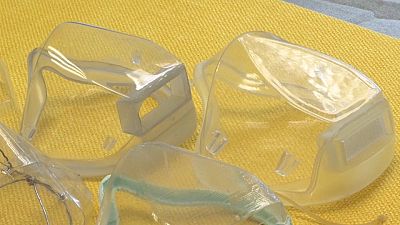 Compulsory mask-wearing has been imposed in all public spaces and public transport in Hong Kong since July 2020 in order to fight the spread of COVID-19.

Now researchers at Hong Kong Lingnan University have come up with a new transparent face mask which they say enables barrier-free communication.

Created with the help of 3D printing technology, this face mask is not the first one to include transparent material. But instead of disposing of a small see-through window over the mouth, it is fully transparent.

It was developed to assist people with hearing impairment by ensuring they can see people’s lips move when they speak.

Behind the idea is Dr Albert Ko, the university’s director of entrepreneurship initiative. It took him and his team a full year to create the reusable transparent mask.

“The original idea of designing this is to help the hearing-impaired people to be able to read lips, so they can communicate with people,” he explained.

The size of the window makes it 100 per cent transparent, so people “can see from the side, from the front, and from other angles as well,” Dr Ko said.

“It's not only the transparency of the mask, it's also the amount of light that is allowed entering onto the face of the wearer, which makes lip-reading a lot more easier. And also, I think the most important point of this mask is that it is actually a protective mask. It has a HEPA filter, and we are also working on a second generation of filter that is highly protective against COVID-19”.

Dr Ko was inspired by the geometry of stealth fighter jets, combined with the use of polygon design and flat surfaces to minimise reflections, according to The Associated Press.

Most importantly, it has a low-cost changeable particulate air filter which needs to be replaced only every two weeks.

No need to worry about heavy breathing either: the mask's inner layer is designed with anti-fog technology.

According to Dr Ko, this project goes beyond engineering or technology - it’s about being inclusive.

“It is a technology project by design, but the program itself, the benefit itself, has to be human, working with human, for human,” he said.

“The idea is hearing impaired people, there are about 100,000 in Hong Kong, even if all of them are wearing this, it's not going to help a lot. It's every one of us, the rest of us who don't have hearing problems wearing this, that is how we can build an inclusive society”.

For 24-year-old Christy Ting, transparent masks allow her lip read and pick up on facial expressions more easily. She has had her hearing impaired since she was a child.

Thanks to this new design, understanding a person’s intentions and emotions is no longer hindered by regular blue and white surgical face masks.

"I think this new fully-transparent mask lets you see the wearer's whole face, which is better compared with a mask which only has a transparent window, as it only shows a small area of the face," she said.

The mask’s creators argue not only service workers like teachers, doctors, police, counsellors and therapists who rely on verbal and facial expressions should use it, it should also be widely available to everyone in order to build a more inclusive society.

“This mask can help the hearing-impaired people communicate with others easier in daily lives, like seeing a doctor, shopping, or going to a bank,” Chen MeièLing, social worker at Hong Kong Society for the Deaf, told AP.

“We hope this mask can promote barrier-free communication and highlight the message of building an inclusive society to everyone”.

In September this year, the team earned a gold award in conceptual design at the MUSE Design Awards.

They also have commissioned a production line in Hong Kong, hoping for the first batch of 10,000 transparent filtrations masks to be on sale by November, at the price of 280 Hong Kong dollars (€30.93).

How unsafe toilets are impacting the health of 3.6 billion people