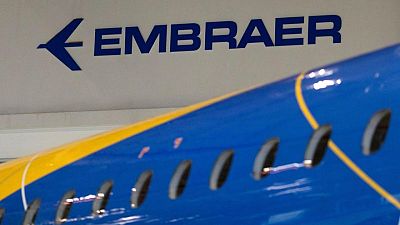 SAOPAULO – Brazilian planemaker Embraer SA said on Thursday its subsidiary Eve has signed a memorandum of understanding to sell up to 100 electric aircraft to lessor Bristow Group, sending Embraer shares higher, in the latest sign of dealmaking in the nascent “flying taxis” sector.

Brazil-listed Embraer shares, which were also boosted by an upgrade to “buy” from “neutral” by analysts at Goldman Sachs, jumped 11.75% to 23.80 reais in early trading in Sao Paulo.

Embraer said in a securities filing that Eve will deliver the first vertical takeoff and landing (eVTOL) aircraft to Bristow by 2026. Both companies will develop an urban mobility model to operate the aircraft, focusing on areas such as regulatory development, eVTOL certification and autonomous operation.

In a market report, Goldman Sachs analysts said subsidiary Eve’s eVTOL business is not yet priced into the Embraer stock, given the market capitalizations of other publicly traded eVTOL companies.

Goldman upgraded Embraer to “buy” with 50% upside to its new 12-month price target of $23 for the company’s ADR, also noting the firm’s exposure to business and regional jet end-market strength, operational performance upside and an attractive valuation.

On the deal with Embraer, Bristow president and CEO Chris Bradshaw said the agreement outlines the continued development for an eVTOL that could “potentially reshape the market for all electric vertical lift with zero emissions.”

He also believes that the move could lower operating costs in the industry and sees it as an expansion for Bristow into new potential end markets.

Eve had announced earlier this week a partnership with Helipass to offer electric flying taxis services in Europe, which are also expected to start in 2026.