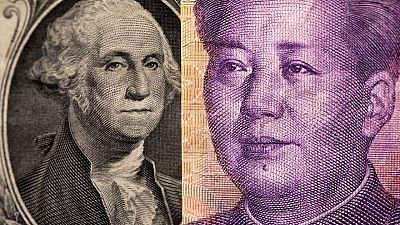 LONDON – The U.S. dollar held below a one-month high tested overnight as global markets stabilised on Tuesday, while investors, bracing for a potential default by property developer China Evergrande, sought safety in the yen and the Swiss franc.

With Monday’s selloff in global markets largely blamed on option-driven flows in an environment of poor market liquidity, some investors perceived it as an opportunity to engage in “buy the dip” trades.

With equity market positioning remaining near historical highs according to recent surveys, Tuesday’s price action restored some calm to currency markets, with cyclically oriented currencies such as the Norwegian crown and the Aussie dollar rebounding sharply.

However, default fears continued to stalk China Evergrande Group despite efforts by its chairman to lift confidence in the embattled property company. Financial markets looked for possible intervention by Beijing to stem any domino effects across the global economy.

“With no signs of a possible solution on the horizon, we see the case for the default risks to continue growing and keep adding pressure to the broader risk appetite,” said Charalambos Pissouros, head of research at JFD Group.

Against a basket of its rivals, the dollar edged lower at 93.12 after reaching its highest since Aug. 23 at 93.45 in the previous session. U.S. equity futures were up 1%.

The bounce in markets along with higher commodity prices benefited the Norwegian crown which rose nearly 1%, erasing most of its overnight losses. The Australian dollar <AUD=D3 and the kiwi dollar rose 0.1% each.

Before Evergrande’s debt crisis unnerved markets, the dollar has been supported ahead of a Federal Reserve meeting this week, when economists surveyed in a Reuters poll expect policymakers to signal expectations of a tapering plan to be pushed back to November.

Cryptocurrencies continued to struggle amid the souring in risk sentiment, with bitcoin broadly steady around $43,000 on Tuesday after earlier touching $40,192.90 for the first time since Aug. 6.