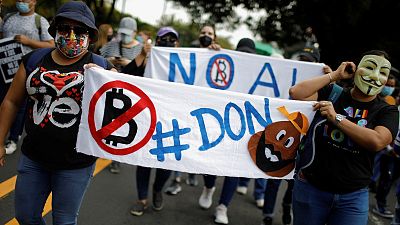 People take part in a protest against the use of Bitcoin as legal tender and legal reforms to extend president Nayib Bukele's term in San Salvador, September 15, 2021.   -   Copyright  Jose Cabezas/Reuters
By Euronews, Reuters and AP  •  Updated: 19/09/2021

El Salvador's Court of Accounts, which oversees its public resources, will investigate a complaint about the government's Bitcoin purchases and the construction of kiosks for cryptocurrency ATMs, according to a document seen by Reuters on Friday.

El Salvador became the first country in the world to adopt Bitcoin as legal tender this month, a move championed by the country's popular President Nayib Bukele.

The government has also launched a digital wallet, Chivo, which is linked to newly-built cryptocurrency cash machines that allow users to withdraw physical money from their digital bitcoin holdings. Its roll out has been plagued by glitches.

The Court of Accounts, which can impose administrative and asset sanctions against officials who cannot solve shortcomings, said it received a complaint on September 10 from a regional human rights and transparency organisation, Cristosal, about Bitcoin implementation in El Salvador.

Cristosal requested an audit of the authorisation processes for the purchase of bitcoins and to review the construction of the booths used for the ATMs linked to the digital wallet of Chivo, a company established with public resources.

Cristosal's complaint was against six members of the Board of Directors of the Bitcóin Trust, consisting of members of the Finance and Economy ministries, as well as the secretariat of Commerce and Investments.

"Having admitted the complaint, it will be proceeded to carry out the legal analysis report and, in a timely manner, forward such report to the General Audit Coordination," the Court of Accounts said in an official document reviewed by Reuters.

One Cristosal official, who was not authorised to speak about the matter, confirmed the complaint has been accepted.

On top of sanctioning officials, the Court of Accounts is empowered to present notices to the Attorney General's Office to initiate criminal proceedings in case it finds irregularities in their investigations.

President Bukele's government did not immediately respond to request for comment.

Ireland's data privacy regulator on Friday said it had asked Facebook to demonstrate that an LED indicator light on the social media giant's newly launched smart glasses is "an effective means" to let people know they are being filmed or photographed.

Ireland's Data Privacy Commissioner (DPC) is the lead regulator of Facebook under the European Union's strict data privacy laws as the firm's European headquarters are based in Dublin.

Facebook smart glasses, which were created in partnership with Ray Ban maker EssilorLuxottica, allow wearers to listen to music, take calls, or capture photos and short videos and share them across Facebook's services using a companion app.

"While it is accepted that many devices including smart phones can record third party individuals, it is generally the case that the camera or the phone is visible as the device by which recording is happening, thereby putting those captured in the recordings on notice," the Irish regulator said in a statement.

"With the glasses, there is a very small indicator light that comes on when recording is occurring. It has not been demonstrated to the DPC and Garante that comprehensive testing in the field was done by Facebook or Ray Ban to ensure the indicator LED light is an effective means of giving notice".

The Irish regulator said it shares the concerns of the Italian Data Protection Regulator, the Garante, which asked Facebook for clarifications on September 10 to assess the smart glasses for compliance with privacy laws.

It also said it wanted Facebook to run an information campaign to alert the public as to how this new consumer product may give rise to less obvious recording of their images.

Clive Sinclair, the British inventor and entrepreneur who arguably did more than anyone else to inspire a whole generation of children into a life-long passion for computers and gaming, has died. He was 81.

Sinclair, who rose to prominence in the early 1980s with a series of affordable home computers that offered millions their first glimpse into the world of coding as well as the adrenaline rush of playing games on screens, died on Thursday morning after a long battle with cancer.

Though ailing, his daughter Belinda Sinclair said, he was still working on inventions up until last week.

"He was inventive and imaginative and for him it was exciting and an adventure, it was his passion," she told the BBC.

Aged 22, he formed Sinclair Radionics, his first company, making mail-order radio kits, including the smallest transistor radio in the world. He really came to prominence in 1973 with the world’s first pocket calculator, before turning his sights and passions into transitioning the world of computers to the confines of the home.

He became a much-beloved figure in Britain and around the world, for his successes — as well as occasional failures. Tributes poured in from modern-day equivalents such as Elon Musk as well as countless "normal" people who first got hooked on computers and gaming via one of Sinclair's inventions.

Sinclair launched his first affordable consumer computer in 1980, which cost less than £100 (€117). The ZX80, which could subsequently be upgraded to the ZX81 with a bit more memory, may not have been sophisticated in today's terms, but it broke new ground, opening up a world of new opportunities.