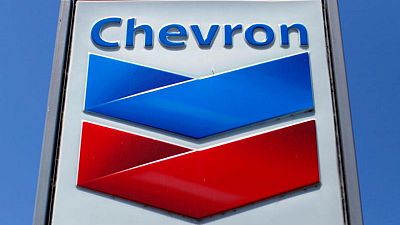 By Sabrina Valle and Arunima Kumar

-Chevron Corp on Tuesday pledged to triple to $10 billion its investments to reduce its carbon emissions footprint through 2028, while saying it was not yet ready to commit to a 2050 net-zero emissions target.

Oil producers globally are under mounting pressure from investors and governments to join the fight against climate change and sharply cut greenhouse gas emissions by mid-century, with U.S. majors lagging efforts by European companies.

Chevron said half of its spending will go to curb emissions from fossil fuel projects. A total of $3 billion will be applied for carbon capture and offsets, $2 billion for greenhouse gas reductions, $3 billion for renewable fuels and $2 billion for hydrogen energy.

Chevron is not ready to commit to net-zero targets. Chief Executive Michael Wirth told investors on Tuesday that the company does not want to “be in a position in which we lay out ambitions that we don’t believe are realistic and deliverable.”

Just a minority of its shareholders currently support a strategy used by European oil companies to invest in less-profitable solar and wind power, he added.

“The board is looking to see, how do you deliver a strategy that meets the needs of shareholders today and the expectations of shareholders for the future?” the CEO said. Directors may re-address a net-zero goal later this year with the company’s climate report, Wirth said.

European oil producers have set plans to shift away from fossil fuels with larger investments in renewables and 2050 emission targets. U.S. oil producers Chevron, Exxon Mobil Corp and Occidental Petroleum sought to reduce carbon emissions per unit of output while backing carbon capture and storage, and doubling down on oil.

BP Plc has said it will invest $3 billion-4 billion a year in low-carbon projects by 2025 and shrink oil and gas production by 40% in the next decade. Royal Dutch Shell Plc in February set annual investments of $2 billion-3 billion in clean energy.

Chevron maintained its goal of paring greenhouse gas intensity by 35% through 2028 compared to 2016 levels from its oil and gas output.

“We expect to grow our dividend, buy back shares and invest in lower-carbon businesses,” Wirth said.