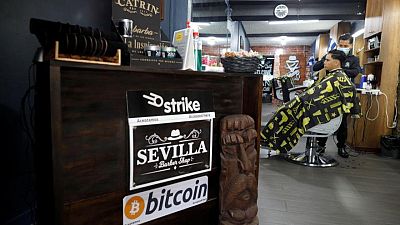 By Anthony Esposito and Nelson Renteria

SANSALVADOR – El Salvador on Tuesday rolled out cryptocurrency bitcoin as legal tender, an unprecedented move that faced some technical hiccups on its first day and left many wondering how it will work.

President Nayib Bukele, who has championed the initiative, said the digital currency will be optional in the poor, dollarized country but that using it will eliminate commissions Salvadorans abroad pay to send home remittances.

El Salvador’s bitcoin law states the market will establish the exchange rate between the crytpocurrency and the U.S. dollar, the nation’s other legal tender. It says all prices may be expressed in bitcoin and tax contributions can be paid in digital currency, while currency transactions in bitcoin are not subject to capital gains taxes.

For accounting purposes, the dollar will be the currency of reference.

The law states that “economic agents” should accept bitcoin as payment for goods and services offered, though it makes exceptions for those lacking access to technology needed for such transactions.

Bukele has said companies can choose at the moment of a bitcoin transaction whether to receive dollars or the digital currency as payment.

“The use of bitcoin will be optional, nobody will receive bitcoin if they don’t want it… If someone receives a payment in bitcoin they can choose to automatically receive it in dollars,” Bukele said in late June.

The popular Bukele, 40, has also said salaries and pensions will continue to be paid in U.S. dollars, without specifying if that included salaries paid to state workers and private sector employees.

At least 200 ATMs and 50 consulting centers from the government digital wallet app “Chivo” are being installed around the country where users can deposit and withdraw money without paying commissions, Bukele has said.

His plan includes a bonus of $30 worth of bitcoin for those who use “Chivo,” named after a local word for something “good” or “nice.”

El Salvador’s Congress in late August approved a law to create a $150 million fund to facilitate conversions from bitcoin to U.S. dollars.

Chivo was available on platforms hosted by Apple and Huawei on Tuesday, after Bukele railed against the tech giants for not carrying the application.

Fintech Bitso, a cryptocurrency platform, said it will be the core service provider for Chivo and will work with Silvergate Bank, a U.S. federally regulated and California state-chartered bank, to facilitate transactions in U.S. dollars.

McDonald’s Corp and Starbucks said they began accepting the cryptocurrency in its restaurants in El Salvador. OpenNode, a bitcoin payment processor, said McDonald’s was accepting payments on the Lightning Network platform it powers.

The El Salvadoran beach town of El Zonte, part of an experiment started in 2019 called Bitcoin Beach, has been using the Lightning Network to enable smaller transactions.

Its use has helped overcome some technical and practical obstacles to using bitcoin, Bitcoin Beach’s founders say. But some in El Zonte say they rarely use bitcoin because of problems with outdated and battered smartphones or insufficient data plans.

A 2020 study by Microsoft and the Interamerican Development Bank concluded that El Salvador had the second lowest internet penetration of 20 countries in Latin America and the Caribbean. At 45%, connectivity was only lower in neighboring Honduras.

Salvadorans are also wary of volatility. Bitcoin can shed hundreds of dollars in value in a day.