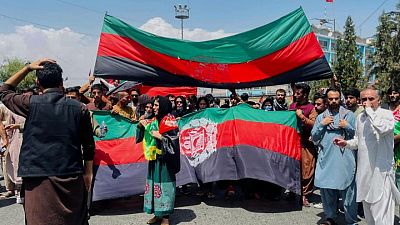 By Tom Arnold and Krisztian Sandor

LONDON – The Taliban sweeping to power in Afghanistan has thrust one of the world’s poorest countries back into the limelight.

Years of violence, instability and corruption have crippled Afghanistan’s economy, making it difficult for businesses to flourish and keeping much of the population impoverished.

After shrinking by 2% in 2020 due to the COVID-19 pandemic, gross domestic product (GDP) was on course to bounce back and grow by 2.7% this year as mobility and trade began to resume, the IMF estimated in June. That was in line with the rough 2.5% average growth rate in recent years, but far below high-single digit levels scaled in the decade after the 2001 U.S. invasion.

Fitch on Friday predicted a sharp contraction of GDP, possibly of as much as 20%.

Critically, the future flow of remittances and international aid Afghanistan relies upon may now be more uncertain. Remittances reached $789 million in 2020, around 4% of GDP, the World Bank estimated.

About two-thirds of the population live below the poverty line, on less than $1.90 per day, according to the Asian Development Bank. That’s up from 55% in 2017.

Agriculture is the main source of income for the majority of Afghans and the country’s main export.

According to the World Trade Organization, Afghanistan exported $783 million of goods in 2020, a near-10% drop on 2019. Dried fruits, nuts and medicinal herbs make up the bulk of exports, mainly to India and Pakistan. But large imports of oil, food and machinery mean Afghanistan has a big trade deficit.

Afghanistan also dominates the global opium and heroin business, which provided the sole income for many poor farmers https://www.reuters.com/world/asia-pacific/profits-poppy-afghanistans-illegal-drug-trade-boon-taliban-2021-08-16but also a boon for the Taliban who extort taxes, trafficking fees and engage in cultivation and production.

The United Nations Office of Drugs and Crime estimates that more 80% of global opium and heroin supplies originate in Afghanistan. At its 2017 peak, opium production accounted for 7% of Afghan GDP.

The country also sits on an estimated $1 trillion worth of mineral deposits such as iron, copper, gold and lithium, a rare earth metal essential for electric vehicle battery production, according to a 2010 Pentagon study. The nation had the potential to become the “Saudi Arabia of lithium,” a Pentagon memo said.

Mining prospects may attract major powers like China to secure resources for its green economy push, but difficult access and lack of roads complicate extraction.

Despite having one of the world’s lowest levels of debt relative to GDP, Afghanistan was deemed at high risk of default even before the current turmoil, given its high dependency on grants and concessional borrowing. The former accounts for around a third of GDP.

The COVID-19 hit heightened worries of financial collapse. To ease Afghanistan’s recovery from the pandemic, the IMF in November to approve $370 million via its extended credit facility, followed up with international donor pledges of $12 billion in civilian aid.

The IMF said on Wednesday that Afghanistan will not be able to access IMF resources, including a new allocation of Special Drawing Rights reserves, due to uncertainty over the recognition of a Taliban government.

In addition to the IMF and other multilateral lenders, Saudi Arabia and Kuwait are among bilateral creditors.

Afghanistan’s official external debt stock was projected to reach $1.7 billion in 2021, around 8.6% of GDP, the IMF calculated in June. Debt levels have remained relatively low since the country received debt relief well over a decade ago under the Heavily Indebted Poor Countries (HIPC) Initiative, as well as additional debt cancellation from Paris Club creditors.

The Taliban takeover is likely to foil plans to kickstart Afghan debt markets and tap domestic savings. Authorities had been looking to issue an inaugural sukuk in early 2022, according to the IMF.

The afghani weakened nearly 6% this week on the expectation that dollars will be scarce following the reported halt of physical dollar shipments, while Afghanistan’s hard-currency reserves parked in the United States and with the IMF are out of reach of the Taliban.

Inflation had been tamed following a big spike in food prices in April last year, but a subsequent recovery in demand and a weak harvest are expected to push prices higher.

The IMF expectation for a 5.8% inflation uptick in 2021 would have made this the largest yearly move since 2013. But with the weakening in the afghani and likely trade disruptions as the Taliban take charge, it could rise above the 8% upper band limit targeted by the Afghan central bank (DAB).

Ajmal Ahmady, acting DAB chief who has fled the country, said via Twitter on Wednesday https://twitter.com/aahmady/status/1427883026256736256 he expected the Taliban to implement tighter capital controls and limit dollar access, while a further currency depreciation would fuel inflation gains that will hurt the poor as food prices rise.

Fitch predicted the currency could slide even further and that a spiral into hyperinflation could not be ruled out.