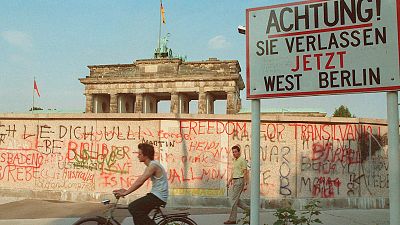 On August 13 1961, Berliners woke up to find their city divided. It was the beginning of a hard new reality which meant they could no longer freely pass from East to West.

It was a reality that would remain for another 28 years.

Checkpoints like the infamous Checkpoint Charlie were set up to facilitate approved travel between both sides of the city.

Now 60 years to the day, the Berlin Wall Foundation has released a new app using augmented reality to give history buffs an immediate sense of just how tense the situation was at the time.

"You can use a smartphone or a tablet to scan the floor in the room where you are. And then create a 3D model of the streets, the corner of Friedrichstrasse and Zimmerstrasse (intersection where Checkpoint Charlie is located), projected right there," Cornelia Thiele, head of Checkpoint Charlie projects for the Berlin Wall Foundation, said.

The app shows the American tanks approaching Checkpoint Charlie on October 27-28 1961, followed by the Soviet tanks on the other side.

“This was a very tense time. The building of the wall was quite recent. And the superpowers, Kennedy on one side for the US and Khrushchev on the other side, for the Soviet Union, had not agreed on the new situation," said Thiele.

The foundation crafted the app using videos, photos and testimonies from the era in order to make the experience as true to life as possible.

"We decided to go with Augmented Reality because we think that it is a new way into this story. Unlike a video or documentation film you can interactively be a part of the story," she added.

Can AI help detect the early stages of Alzheimer’s?