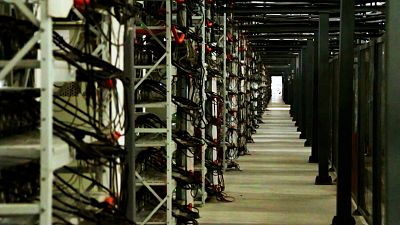 Inside the Bitriver data centre in Siberia which is facilitating bitcoin mining for clients all over the world.   -   Copyright  AP Photo
By Aisling Ní Chúláin  & AP  •  Updated: 28/06/2021

A Russian company operating in the far reaches of Siberia is looking to reap the rewards of a cheap hydro-energy supply and a surging cryptocurrency market.

The vast data centre is operated by Bitriver which provides internet connection, power and maintenance services to an international network of clients looking to mine Bitcoin - a process that requires huge amounts of computational power.

“At the moment, there are 45,000 units. In terms of (electricity) consumption, each unit can be compared to a home kettle, but which is always on 24/7, all-year-round.” Bitriver operations manager Igor Bryuzgin said.

Bitcoin has been widely criticised for its environmentally-damaging practices, requiring huge amounts of electricity to power mining computers, or rigs.

Responding to these criticisms, Igor Runets, the general director of Bitriver, pointed out that the location is a strategic asset to his business.

"We chose Siberia as a location for several reasons.The first is the cheap cost of electricity. This is the excess capacity of hydroelectric power plants built in this region, that is, an imbalance between the generation of electricity and its consumption," he explained.

“We believe that such an energy-intensive and potentially significant for the economy, for the world as a whole, industry, it cannot be environmentally harmful and dirty, which means that something is going wrong.” Runets added.

“Therefore we, on our part, strive to consume 100 per cent green electricity, and we believe that sooner or later, all other miners will come to this too”.

Not all hydropower is good enough and the same. If this is so-called plain hydropower, not mountain, but plain, it's a lot of disturbance of nature ecosystems, huge water reservoirs, with change of climate, with damage for forest, damage for nature.

Hydropower is classed as a renewable energy source but some environmentalists argue that it’s not "green" as it can be associated with environmental destruction during a dam’s construction.

"Not all hydropower is good enough and the same. If this is the so-called plain hydropower, not mountain, but plain, it's a lot of disturbance of nature ecosystems, huge water reservoirs, with change of climate, with damage for forest, damage for nature. Therefore, ecologists are very sceptical about large hydro dams,” Alexey Kokorin, WWF Russia's climate and energy programme director, said.

"This electricity is without CO2, yes, it's the case, but they could be skeptical about the green character of these dams”.