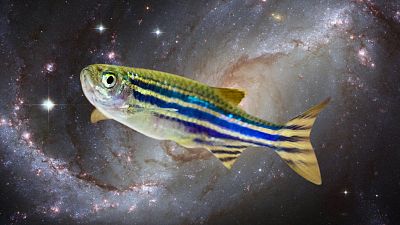 Zebrafish can protect themselves against harsh conditions in an induced hibernating state.   -   Copyright  AFP
By David Walsh  •  Updated: 17/12/2021

Prolonged periods of time in space are punishing on the human body.

Astronauts who have endured space flights have all experienced negative effects from the journey; from loss of body mass and muscles to the redistribution of bodily fluids to the head, which puts pressure on the eyes causing vision problems.

Higher levels of radiation in space can also damage the heart, cause arteries to narrow or harden, and eventually heart disease.

So, how can humans survive the 480 million km journey to the Red Planet without them potentially dying, or at the very least, permanently injuring themselves?

A team of scientists at Queen’s University Belfast believes they have the answer thanks to a pet shop favourite - zebrafish.

"NASA plans to return to the Moon and onward to Mars in the coming years," said Professor Gary Hardiman, a researcher from the Institute for Global Food Security (IGFS) at Queen’s and the senior author of a new study published in the journal MDPI Cells.

Extensive research in recent years has found that zebrafish share more than 70 per cent of their genetic code with humans, making it a key ally of scientists looking to model how best to fight an array of human diseases.

A 2019 study published in the journal Nature - which took 10 years for scientists to complete - also identified sleep patterns in the small brains of zebrafish which were similar to the brain activity of sleeping human beings.

But one feature of the zebrafish that has caught the attention of Hardiman’s team of researchers at Queen’s is its ability to use a form of hibernation called torpor.

"We set out to determine if induced torpor is a viable countermeasure to the harmful effects of spaceflight," explained Hardiman.

"If humans could replicate a similar model of hibernation we have observed in the zebrafish, it could increase our chances of making humans a spacefaring species".

A tool of survival

Torpor is an inactive state akin to hibernation where the metabolism slows down to protect an animal from harsh external conditions, such as food scarcity or low temperatures.

The benefits of humans being able to harness this ability could be a game changer for future space travel, according to the team.

“For example, it [hibernation] would lead to reduced brain function which would cut down on psychological stress,” said Hardiman.

“The change to their metabolism would stop them requiring food, oxygen or water and there is a possibility it would protect their muscles from wasting due to the effects caused by radiation and microgravity”.

During the course of the study, researchers exposed zebrafish to radiation similar to that which humans would experience travelling on the near seven-month trip to Mars.

The researchers found that this radiation caused signatures of oxidative stress, stress hormone signaling, and halting of the cell cycle within the zebrafish.

The researchers then induced torpor in a second group of zebrafish which were then exposed to the same dose of radiation and analysed them to assess the protective effects during this induced state of physical and mental inactivity.

The results showed that torpor lowered the metabolic rate within the zebrafish and created a radioprotective effect, protecting against the harmful effects of radiation, such as muscle and bone wastage, advanced ageing, and vascular problems.

"Our results reveal that whilst in induced torpor, the zebrafish showed that a reduction in metabolism and oxygen concentration in cells promotes less oxidative stress and greater resistance to radiation," said Thomas Cahill, a PhD student from IGFS at Queen’s University and co-first author of the research.

Could it help future missions?

"These insights into how a reduction in metabolic rate can offer protection from radiation exposure and could help humans achieve a similar kind of hibernation, counter measuring the damage they currently face during spaceflight".

The study, at least in theory if not in practice, could help to inform missions already in train to get to the Red Planet.

NASA first announced plans for the future habitation of Mars in 2015 with the first stage already in progress. This first "Earth reliant" stage is underway, with the Mars rover mission gathering data to understand the planet and its potential to host life.

The US space agency is aiming to send astronauts to Mars sometime in the 2030s, but not until the effects of long-duration space travel are better understood and infrastructure for deep space missions is in place.

Elon Musk’s SpaceX programme, however, aims to send a manned mission to the planet as early as 2024.