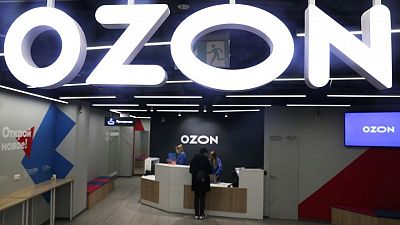 <div> <p>By Alexander Marrow and Olga Popova</p> <p><span class="caps">MOSCOW</span> – Ozon wants to achieve online transaction volumes of around $34 billion in five years and a third of Russia’s rapidly expanding e-commerce market, its chief operating officer told Reuters.</p> <p>One of Russia’s largest e-commerce players, Ozon last week reported a sixth consecutive quarter of triple-digit gross merchandise volume (<span class="caps">GMV</span>) growth and upped its <span class="caps">GMV</span> growth target for 2021 to 100% from 90%.</p> <p>A $1 billion Nasdaq debut last year has allowed Ozon to become slightly more aggressive in some segments, such as IT development and logistics infrastructure, where it sees no risk of over-investment, its <span class="caps">COO</span> Daniil Fedorov said.</p> <p>“We believe that over the next five years we will be able to take a share of at least a third of the e-commerce market and for <span class="caps">GMV</span> to grow to 2.5 trillion roubles ($34.03 billion) a year,” Fedorov said. </p> <p>“We are prepared to be loss-making, we are prepared to invest, but we are not prepared to be inefficient.”</p> <p>While Ozon trails Wildberries in terms of market share, it is growing slightly faster. </p> <p>Its smaller but quickly expanding competitors domestically include AliExpress Russia, a joint venture with China’s Alibaba and Russian partners, and the e-commerce arms of lender Sberbank and internet giant Yandex. </p> <p>Ozon on Wednesday completed its acquisition of Oney Bank, expanding its financial service operations, and has now issued more than 800,000 Ozon Cards, debit cards that give users cashback and other offers.</p> <p>The company is also growing its advertising business and developing video streaming and review services. </p> <p>Ozon plans to launch in Belarus this year as part of an expansion drive that could extend further into the former Soviet Union, a region Fedorov said it would be unwise to ignore.</p> <p>“There are no specific plans for other countries yet, but we should enter the majority of <span class="caps">CIS</span> (Commonwealth of Independent States) countries on the five-year horizon,” he said. </p> <p>With low penetration in Russia’s e-commerce market, Fedorov said Ozon’s main focus for now is at home, looking to expand its presence in far-flung regions like Siberia and Khabarovsk.</p> <p>($1 = 73.4730 roubles) </p> <p/> </div>