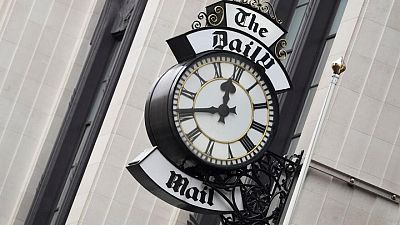 <div> <p><span class="caps">LONDON</span> -The publisher of the Daily Mail reported a 20% drop in pretax profit in its first half as its consumer business, which also includes freesheet Metro, was hurt by volatile ad markets and events and exhibitions were hit by <span class="caps">COVID</span> restrictions.</p> <p>Daily Mail and General Trust Chief Executive Paul Zwillenberg said the company’s businesses performed as expected given the market conditions.</p> <p>“We saw good revenue and profit growth from Mail Online and a solid performance from Mail print titles,” he said in an interview on Thursday. </p> <p>“Not surprisingly Metro and our events businesses continued to be impacted by the pandemic and they were a drag on the overall results.”</p> <p>The company said the advertising outlook for consumer media was difficult to predict, but circulation revenues were expected to be resilient, helped by a Daily Mail cover price increase.</p> <p>Shares in <span class="caps">DMGT</span> have been boosted by its 20% stake in used car seller Cazoo, which said in March it would go public in New York through a merger with <span class="caps">AJAX</span> I Acquisition Corp.</p> <p>Zwillenberg said he was delighted to see Cazoo go from strength to strength, with <span class="caps">DMGT</span>’s stake valued at $1.35 billion, an eight-times return in three years.</p> <p>He said <span class="caps">DMGT</span> would be locked-up for six months after Cazoo goes public, and he declined to comment on the longer term.</p> <p>“The focus is on getting the transaction away and helping Cazoo settle into life as a public company,” he said.</p> <p><span class="caps">DMGT</span> reported pretax profit of 47 million pounds ($66.35 million) for the six months to end-March on revenue down 12% on an underlying basis to 580 million pounds.</p> <p>Its shares were trading up 3.5% in early deals.</p> <p>($1 = 0.7084 pounds)</p> </div>