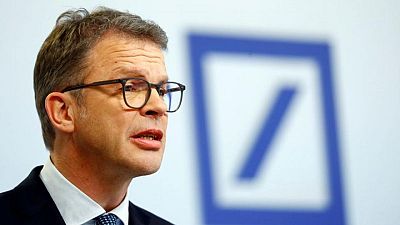 <div> <p><span class="caps">FRANKFURT</span> – Deutsche Bank’s multi-year overhaul is ahead of plan and remains its primary focus, Chief Executive Christian Sewing told shareholders on Thursday, promising an era of more sustainable profit.</p> <p>The bank’s annual shareholder meeting, held online due to the coronavirus pandemic, took place in a more relaxed atmosphere than in recent years, a reflection of the lender’s return to profit and rising share price. </p> <p>Three years into its restructuring, Sewing said Germany’s largest bank wasn’t over the finish line.</p> <p>“But we have come a long way. We still have work to do, but we have already achieved so much,” he said. </p> <p>Asked about possible mergers and acquisitions, Sewing said: “Our main focus is and remains the successful execution of our transformation by 2022”. </p> <p>Deutsche posted a net profit for the first quarter, its strongest result for seven years, driven by its investment bank which outperformed major U.S. rivals.</p> <p>Its shares are up more than 130% from last year’s record lows.</p> <p>“There are no more question marks hanging over the stability of our bank, while many – but not all – of the problems of recent years have been remedied,” said Chairman Paul Achleitner.</p> <p>Alexandra Annecke, a fund manager with Union Investment, said Deutsche had become an exciting turnaround story and this year’s meeting for once wasn’t taking place in a crisis. </p> <p>“Shareholders have the worse behind us,” she said. “We finally see light at the end of the tunnel.”</p> <p>Deutsche’s restructuring includes exiting business lines such as equities trading and shedding 18,000 staff. </p> <p>Ratings agencies have become more optimistic about the bank. Moody’s recently put Deutsche under review for a possible upgrade. </p> <p>Despite a spate of good news, however, the bank is still having problems with money laundering controls. </p> <p>Germany’s financial regulator last month ordered Deutsche to enact further safeguards to prevent money laundering.</p> <p>“We must improve our transaction monitoring,” Achleitner said.</p> <p/> </div>