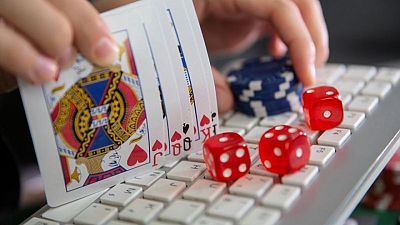 <p><body> <p>By Helena Soderpalm</p> <p><span class="caps">STOCKHOLM</span> (Reuters) – Swedish gambling technology company Evolution is betting online casinos will increasingly replace physical venues and help to maintain its rapid recent expansion.</p> <p>Evolution shares have jumped 170% over the past year, boosted by growing demand for online casinos during lockdowns, pushing its market value up to 314 billion crowns ($38 billion) compared with less than 3 billion when it listed in 2015.</p> <p>That puts the firm, which produces and licenses live casinos to gaming operators, among Sweden’s 10 biggest listed companies along with the likes of telecoms equipment maker Ericsson, which has a 367 billion crown market value.</p> <p>Evolution, which has more than 500 customers including 888 Casino and Betsson, bought Swedish rival NetEnt for $2.12 billion last year, handing it popular slot games such as Starburst and Piggy Riches.</p> <p>Chief Executive Martin Carlesund said Evolution could buy companies anywhere as it plans to be present in all regulated gambling markets, though it was not aiming to drive consolidation in the industry.</p> <p>“The market as such will double and double again. It’s almost hard to grasp the potential that there is,” Carlesund said, adding that physical casinos would provide “perhaps 50, 40 or 30%” or less of total casino revenues in 15 years.</p> <p>Industry data provider H2 Gambling Capital (H2GC) said that extrapolating growth forecasts out to 2036 would see the casino market expand by about 90% to 231 billion euros ($283 billion), with online gambling accounting for 22% of overall revenue versus 16% in 2021.</p> <p>    H2GC senior consultant Ed Birkin would not rule out that online casinos could make up 50% of the market within 15 years, as structural shifts could make current growth rates irrelevant. </p> <p>    “But based on current levels of growth and relative market size, you would have to assume a significant increase in growth in online along with a significant decline in land-based to achieve this,” Birkin said.</p> <p><span class="caps">INNOVATION</span> <span class="caps">KEY</span></p> <p>With U.S. and Asian markets at an early stage, Evolution, whose first-quarter sales leapt more than 100% to 236 million euros, will keep growing fast, said analyst Marlon Varnik at Pareto, which has a buy recommendation on Evolution shares. </p> <p>Competitors catching up, political risks and key people in innovation leaving were potential risks ahead, Varnik said, although Evolution was extending its lead for now.</p> <p>“Innovation is a very important factor as to why Evolution has been so successful with its games,” he said.</p> <p>Rivals include London-listed Playtech, while Evolution’s Carlesund said the Swedish firm also competes with Netflix and other net-based entertainment providers.</p> <p>Playtech said on Wednesday that its online growth had been very strong in the first four months of 2021 and it was ahead of its forecasts for operating profit.</p> <p>Carlesund said Evolution could well beat its forecast for an operating (<span class="caps">EBITDA</span>) margin of 65% this year and that he expected many more U.S. states to become regulated markets for online gambling in 10 to 15 years.</p> <p>“We’ll be a bit like Google was in 1999: if you’re in this business you should be in Evolution,” he said.</p> <p>($1 = 8.2591 Swedish crowns)</p> <p>($1 = 0.8167 euros)</p> <p/> <p> (Reporting by Helena Soderpalm; Editing by David Clarke)</p> </body></p>