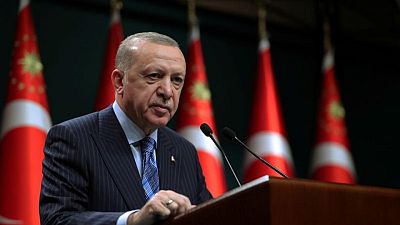 <p><body> <p><span class="caps">ISTANBUL</span> (Reuters) – Turkish President Tayyip Erdogan will hold a roundtable call with several U.S. corporate chief executives on Wednesday to highlight both countries’ growing cooperation, Turkey’s embassy in Washington confirmed on Tuesday. </p> <p>On Monday, Reuters reported the meeting was scheduled with some 20 executives. One source called it an opportunity to test the waters with companies ahead of Erdogan’s planned meeting with U.S. President Joe Biden next month.</p> <p>The “<span class="caps">CEO</span>-level virtual roundtable” would include a wide range of U.S. industries, Yaprak Ece, an official at the Turkish Embassy, said in an email. </p> <p>“President Erdogan regularly meets with the international investors (and) this event would highlight the two countries’ growing economic and trade cooperation, in addition to current economic affairs,” she said.</p> <p>Another source who spoke to Reuters said executives from Microsoft and Netflix are among those to join the call. The two companies did not respond to requests for comment. </p> <p>The planned June 14 meeting between Biden and Erdogan, on the sidelines of a <span class="caps">NATO</span> summit in Brussels, would be their first in-person encounter since the U.S. election last year. </p> <p>Bilateral ties have been strained on several fronts including U.S. tariffs on Turkish steel and Ankara’s purchase of Russian missile defences in 2019, which prompted Washington to oust Turkey from a consortium producing F-35 jets.</p> <p/> <p> (Reporting by Jonathan Spicer, editing by Louise Heavens)</p> </body></p>