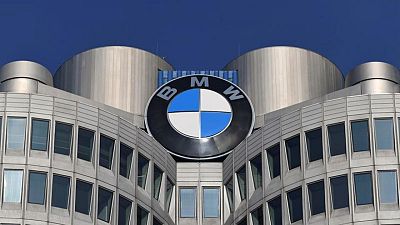 BRUSSELS (Reuters) -BMW and Volkswagen are set to face reduced EU antitrust fines over clean air technology after regulators narrowed the scope of an investigation, a person familiar with the matter said.

The case is different from Volkswagen’s diesel emissions cheating scandal, which has cost it more than 31 billion euros ($38 billion in fines and settlements.

The European Commission, which charged the German carmakers in 2019 with colluding to block the rollout of clean emissions technology, is likely to issue fines before the summer break, the person told Reuters on Tuesday.

The EU competition watchdog had said previously that the case involved the “circle of five”, namely BMW, Daimler and Volkswagen Group’s VW, Audi and Porsche.

The EU case will only focus on selective catalytic reduction (SCR) systems, which reduce nitrogen oxides from diesel car emissions through the injection of urea (also called AdBlue) in the exhaust gas stream, the person said.

The Commission said in its 2019 charge sheet that the German carmakers colluded to restrict the size of AdBlue tanks between 2006 and 2014.

The Commission said the investigation was ongoing and declined further comment.

BMW and Volkswagen declined to comment. Last week BMW cut its antitrust provisions by 1 billion euros after it estimated a lower EU fine

Daimler, which alerted the wrongdoing to the Commission, reiterated that it will not face a fine and declined further comment.

(Reporting by Foo Yun Chee in Brussels; Additional reporting by Christina Amann in Berlin and Christoph Steitz in Frankfurt; Editing by Alexander Smith)