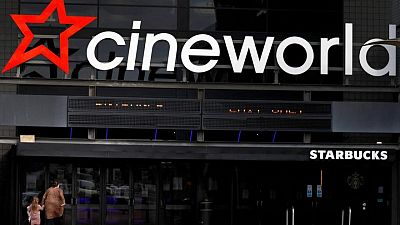 <p><body> <p>By Muvija M and Chris Peters</p> <p>(Reuters) -Cineworld said on Monday its UK reopening weekend had topped expectations as animated comedy “Peter Rabbit 2” drew crowds after months of lockdown, in a promising sign for the cinema industry ahead of the release of summer blockbusters. </p> <p>The world’s second-largest cinema chain, which operates the Regal Cinemas brand, said more than 97% of its U.S. cinemas had resumed operations, while most of its screens in the rest of the world were expected to reopen by the end of the month. </p> <p>Shares in the only UK-listed cinema operator rose 3% to 89.4 pence, among top gainers on the mid-cap index by 0813 <span class="caps">GMT</span>.</p> <p>The strong weekend is an encouraging sign for Cineworld, which in March sunk to its first-ever loss as the pandemic closed cinemas and disrupted movie releases across the world. </p> <p>The UK, which went into a third national lockdown in January this year, has been gradually easing restrictions thanks to a successful vaccination drive, with cinemas now able to operate at 50% capacity.</p> <p>“With improving consumer confidence and the success of the vaccination rollout, we expect a good recovery in attendance over the coming months,” Cineworld Chief Executive Mooky Greidinger said.</p> <p>UP <span class="caps">NEXT</span>: “<span class="caps">CRUELLA</span>” <span class="caps">AND</span> “A <span class="caps">QUIET</span> <span class="caps">PLACE</span> 2”</p> <p>Nearly half of U.S. adults have received a first dose of a <span class="caps">COVID</span>-19 vaccination, and around three quarters of the UK population.</p> <p>Greidinger said he expected a strong performance next week too, helped by Walt Disney’s “Cruella” and Paramount thriller “A Quiet Place 2”. </p> <p>Hollywood studios have promised a slate of big-ticket releases for the summer, including Marvel’s “Black Widow” and the new James Bond movie “No Time to Die”, with top actors, directors and executives previewing upcoming films in theatres.</p> <p>However, the UK has warned that its plan to lift all restrictions next month could be delayed due to a spike in infections linked to the virus variant first found in India. </p> <p>A catastrophic second wave in India has again closed theatres in the country, which added millions of dollars to the box office receipts of Christopher Nolan’s “Tenet” and superhero movie “Wonder Woman 1984” last year.</p> <p>Cineworld, which has 9,311 screens globally, said it had received the full $203 million tax refund under the U.S. government’s coronavirus relief program for companies. </p> <p> (Reporting by Chris Peters and Muvija M in Bengaluru; Editing by Ramakrishnan M., Kirsten Donovan)</p> </body></p>