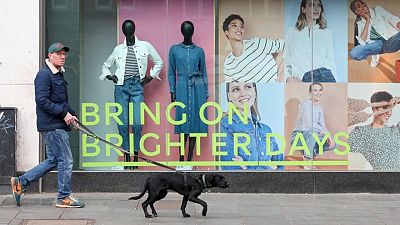 <p><body> <p>By David Milliken and Andy Bruce</p> <p><span class="caps">LONDON</span> (Reuters) -British retail sales surged by 9.2% in April, when non-essential shops reopened after months of closure due to <span class="caps">COVID</span> restrictions, their biggest jump since a previous reopening in June, official data showed on Friday.</p> <p>Sales volumes were 42.4% higher than a year earlier, when they collapsed during Britain’s first coronavirus lockdown, the Office for National Statistics said.</p> <p>Economists polled by Reuters had on average forecast that retail sales volumes would rise by 4.5% on the month in April and surge 36.8% on the year.</p> <p>“Clothing sales soared by nearly three quarters as consumers took advantage of being able to visit physical stores. Perhaps unsurprisingly, overall online sales dipped, but still remain high,” <span class="caps">ONS</span> deputy national statistician Jonathan Athow said.</p> <p>British retail sales are now 10.6% above their level in February 2020, before the pandemic struck, though many high-street retailers have suffered badly from repeated lockdowns which accelerated the shift to online commerce.</p> <p>Department store Debenhams closed its last store this month after more than 240 years trading, although the brand name has been bought by online retailer Boohoo.</p> <p>Retailers such as clothing and furniture stores which the government classed as non-essential only reopened to shoppers in England on April 12 after shutting in early January.</p> <p>Bank of England policymakers are keeping a close watch on retail sales as they expect a surge in spending as richer households spend around a tenth of savings built up during lockdown over the next three years.</p> <p>However retailers will have to compete with newly reopened pubs and restaurants for a share of disposable income.</p> <p> (Reporting by David Milliken and Andy Bruce)</p> </body></p>