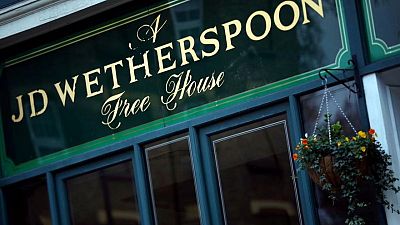 <p><body> <p>By Muvija M</p> <p>(Reuters) – British pubs and restaurants reopening after months of lockdown are facing a potential staffing crunch as they look to serve more hungry and thirsty customers over the warmer summer months.</p> <p>Indoor dining resumed in Britain this week and pub bosses have told Reuters they are now seeing the impact of a post-Brexit exodus of European workers, with a particular concern about finding kitchen staff.</p> <p>“There is a labour shortage in the UK, but I don’t think people are worried about coming back because of the virus or because they feel the career is unstable,” said Ralph Findlay, <span class="caps">CEO</span> of pub company Marston’s.</p> <p>“The issues are more about Brexit and the shortage of EU labour,” he added as the company, which operates around 1,500 pubs, announced results this week.</p> <p>Data from research firm Vacancysoft showed that posted vacancies for permanent roles in UK hospitality had more than doubled to 3,387 in April when outdoor dining resumed compared with February when it was 1,309.</p> <p>Britain plans to lift all Covid curbs on its economy from June 21, including limits on the size of groups in pubs and restaurants, but the spread of the so-called Indian variant has put that timetable at risk.</p> <p>Phil Urban, the head of Britain’s second-largest pub operator Mitchells & Butlers, said such uncertainty had caused some workers to give up on the sector after a difficult year. </p> <p>“I think because of the start-stop nature of lockdowns, a lot of the people who have left the sector and gone and got other jobs probably won’t return until there is more certainty that we are out of this,” Urban said.</p> <p>The pinch point will be in finding workers for the back of house, which typically includes kitchens, offices, and storage rooms, Urban added.</p> <p>More than one in 10 of Mitchells’ employees were from the European Union before the pandemic, Urban said, adding a number had left the country and were not unable to return because of Brexit or pandemic-related travel restrictions. </p> <p>Urban said that the staffing situation will become clearer over the next couple of weeks, as they only find out if workers on furlough are returning when they try to recall them. </p> <p>UK staff are harder to find as millions are still benefiting from furlough payments.</p> <p>Rival pubs group Wetherspoon said it was looking for a mix of bar or kitchen workers and front of house staff across its 870 pubs.</p> <p>Vacancysoft expects vacancies in front of house, including waiters and waitresses, or other service roles, to hit record levels if pandemic travel restrictions continue.</p> <p>“The government will need to address and reorganise short term visa programme by sector – with areas such as hospitality taking precedence as these roles cannot be done remotely,“ its <span class="caps">CEO</span> James Chaplin said, referring to workers from the EU. </p> <p/> <p> (Reporting by Muvija M in Bengaluru. Editing by Keith Weir and Jane Merriman)</p> </body></p>