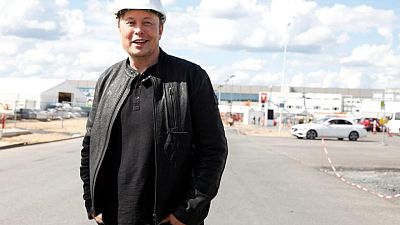 <p><body> <p>(Reuters) – Tesla Inc Chief Executive Officer and cryptocurrency supporter Elon Musk said on Thursday he has not and will not sell any of his dogecoin holdings.</p> <p>Earlier this month, he called the cryptocurrency a “hustle” during his guest-host spot on the “Saturday Night Live” comedy sketch TV show, leading prices to tumble.</p> <p>“Yeah, I haven’t & won’t sell any Doge,” Musk said on Twitter in response to a tweet on Thursday claiming he would never sell any of his doge holdings and that he was the “ultimate hodler”. (https://bit.ly/342BQMU)</p> <p>His tweets on dogecoin have turned the once-obscure digital currency into a speculator’s dream. </p> <p>Musk has posted numerous comments about cryptocurrencies on Twitter this year, causing prices to gyrate. </p> <p>Last week, Musk said Tesla would no longer accept bitcoin for car purchases, citing long-brewing environmental concerns for a swift reversal in the company’s position on the cryptocurrency.</p> <p>Dogecoin was up 12% at $0.405, according to crypto exchange Binance.</p> <p/> <p> (Reporting by Uday Sampath in Bengaluru; Editing by Sriraj Kalluvila)</p> </body></p>