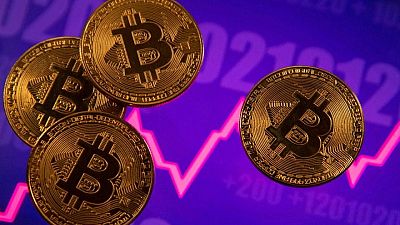 <p><body> <p><span class="caps">NEW</span> <span class="caps">YORK</span> (Reuters) – Bitcoin and ethereum posted their largest one-day drop since March last year on Wednesday, with losses in the market capitalization for the entire cryptocurrency sector approaching $1 trillion.</p> <p>The sharp declines came after China banned financial and payment institutions from providing cryptocurrency services.</p> <p>Bitcoin dropped to $30,066, the lowest since late January. It was last down 22% at $33,502. The most popular cryptocurrency posted its largest one-day loss since March 2020.</p> <p>Ethereum fell to as low as $1,850, its weakest level since late January as well. It was last down 28% at $2,439. Ethereum’s one-day losses were the biggest since March last year.</p> <p/> <p> (Reporting by Gertrude Chavez-Dreyfuss)</p> </body></p>