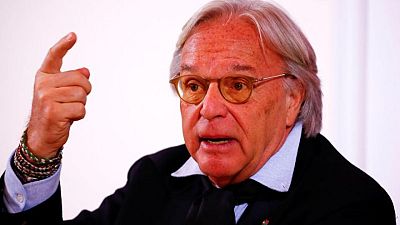 <p><body> <p><span class="caps">MILAN</span> (Reuters) – The head of Italian luxury group Tod’s said that if ever decided to sell his company it would be to <span class="caps">LVMH</span>’s boss Bernard Arnault but he added that he had no plans like that for now.</p> <p>Speaking at the Financial Times Luxury Summit, Tod’s founder and chairman Diego Della Valle said <span class="caps">LVMH</span>’s recent decision to raise its stake in Tod’s to 10% was a message “that we like to stay together”. He reiterated that if the right opportunity arose, the two groups might “do something together”.</p> <p>Asked if that meant Tod’s could be sold to <span class="caps">LVMH</span>, Della Valle said: “If one day I decide (to sell), I believe in people like Bernard (Arnault),” adding however that he and his family had no plans to sell Tod’s for the time being.</p> <p>Asked again if, should he decide to sell, it would be to Arnault, Della Valle said: “100 percent, for sure.” </p> <p/> <p> (Reporting by Silvia Aloisi and Claudia Cristoferi; editing by Agnieszka Flak)</p> </body></p>