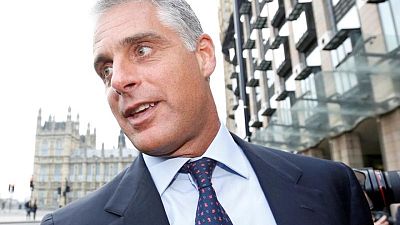 <p><body> <p>By Emma Pinedo and Jesús Aguado</p> <p><span class="caps">MADRID</span> (Reuters) -Santander boss Ana Botin defended the bank’s actions in a court hearing over the withdrawal of a multi-million euro offer more than two years ago to make Italian banker Andrea Orcel its <span class="caps">CEO</span>.</p> <p>The very public row, which judge Javier Sanchez Beltran unexpectedly suspended after a two-hour hearing on Wednesday, offered a rare glimpse into the inner workings of a major bank.</p> <p>It ended up in a Madrid court after Spain’s largest lender dropped plans to make Orcel, previously the top investment banker at Swiss bank <span class="caps">UBS</span>, chief executive as a result of a dispute over his pay package. </p> <p>Orcel and Botin, both wearing dark suits and masks, sat in the front row at the hearing, which was held in a conference hall instead of a traditional court due to <span class="caps">COVID</span>-19 protocols and because of the intense media interest in the case.</p> <p>The case, which revolves around whether a four-page offer letter to Orcel was a binding job contract or a non-binding initial offer, had been expected to be concluded on Wednesday, although a verdict could take weeks or months.</p> <p>But Beltran postponed the hearing after a request by Orcel’s lawyer Alvaro Remon that top executives from <span class="caps">UBS</span> should testify as part of the banker’s case. <span class="caps">UBS</span> Chairman Axel Weber and Mark Shelton, head of performance and rewards at <span class="caps">UBS</span>, were called as witnesses but had not testified on Wednesday for health reasons.</p> <p>Sources have told Reuters that Weber was a key figure in blocking Orcel’s move as he had resisted <span class="caps">UBS</span> stumping up some of a deferred compensation package that Orcel stood to lose.</p> <p>Santander’s lawyer Jose Miguel Fatas had told the court he would rather all pending witnesses, including Santander’s general secretary Jaime Perez Renovales, who signed the original job offer, and Roberto di Bernardini, the bank’s head of human resources at the time, to testify on the same day.</p> <p>Botin, her mouth and nose covered by a blue mask, told the court that the letter offering Orcel the <span class="caps">CEO</span> role “was not a contract”, and that Santander’s board had never approved his final compensation package. </p> <p>“The buyout figure was not agreed. The maximum figure was set and the board decided to communicate the appointment on the basis that the overall package would be in line with the market. But the board did not approve the buyout figure,” Botin said.</p> <p>She had earlier greeted Orcel, who has not been called to testify, with a “good morning” before taking her seat four spaces away from her former investment banking adviser.</p> <p>Orcel declined to comment after the court hearing.</p> <p><span class="caps">TRACKING</span> <span class="caps">THE</span> ‘<span class="caps">RAINMAKER</span>’</p> <p>Botin surprised the banking world when she offered Orcel the top job in September 2018, but Santander changed its mind the following January, saying it could not meet his pay demands.</p> <p>These centred on covering up to 35 million euros of his compensation package from <span class="caps">UBS</span>, where the high-profile “rainmaker” Orcel worked on deals for Santander as it built up its presence outside Spain over many years.</p> <p>Botin said on Wednesday that Orcel’s appointment as Santander <span class="caps">CEO</span> had never actually taken place and a contract was not fulfilled, although she had met him to discuss the Spanish bank’s strategy after offering him the top job.</p> <p>She said the offer letter to Orcel had stated that any payments he was set to receive from his former employer <span class="caps">UBS</span> would help to reduce the total compensation paid by Santander.</p> <p>But Botin told the court that Orcel had not made his best effort to get <span class="caps">UBS</span> to pay a significant portion of his deferred pay and had “refused to use the 13.7 million (euros) that he was to receive from <span class="caps">UBS</span> to reduce the buyout payment”.</p> <p>After the <span class="caps">CEO</span> role fell through, the 57-year-old banker had initially sought as much as 112 million euros ($137 million) from Santander for breach of contract and damage to his career. </p> <p>But he cut this to 67 million euros, sources close to the matter said and a court document showed.</p> <p>Santander’s lawyer said after the hearing that Orcel’s total claim could be around 76 million euros, taking into account a part of the variable salary that Orcel is also claiming. </p> <p>Orcel also dropped the part of his legal claim that would require the Spanish bank to hire him, because he has since been appointed as <span class="caps">CEO</span> of Italy’s UniCredit.</p> <p>Pay has also been an issue for Orcel at UniCredit, where last month he only narrowly defeated a shareholder revolt over his up to 7.5 million euro ($9 million) package.</p> <p>($1 = 0.8186 euros) </p> <p> (Reporting by Emma Pinedo and Jesús Aguado in Madrid; additional reporting by Nathan Allen; Editing by John Stonestreet and Alexander Smith)</p> </body></p>