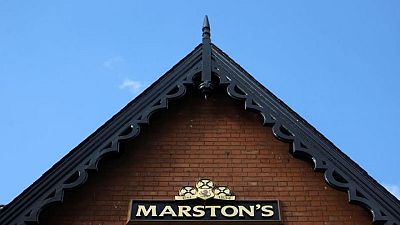 (Reuters) -British pub operators Marston’s and Mitchells & Butlers said on Wednesday they expect to see more people at their outlets, as the easing of pandemic-led curbs encourages people to eat out after staying home for months.

The companies reported bigger half-yearly losses as stringent restrictions through 2020 and earlier this year severely hit pubs and restaurants. Outdoor dining in Britain began reopening only in April, while indoor dining and drinking resumed this week.

Marston’s, the two-century old brewer of Pedigree, Hobgoblin and Lancaster Bomber beers, said about 1,000 pubs have reopened across England, Wales and Scotland since April, and early trends show sales in like-for-like locations running at around 80% of pre-COVID-19 levels.

The company also expects to reduce borrowings to under 1 billion pounds ($1.42 billion) by 2025. Its total debt stood at 1.6 billion pounds for the 26 weeks ended in April.

Meanwhile, M&B, which owns Harvester, Toby Carvery and All Bar One, said its like-for-like sales were restricted to a decline of 30.1% against pre-COVID-19 levels.

(Reporting by Vishwadha Chander and Pushkala Aripaka in Bengaluru; Editing by Rashmi Aich and Uttaresh.V)