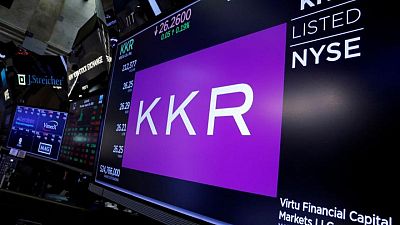 <p><body> <p>By Yadarisa Shabong</p> <p>(Reuters) -Private equity firm <span class="caps">KKR</span> aims to buy John Laing Group in a deal that values the British infrastructure investor at about 2 billion pounds ($2.84 billion), it said on Wednesday.</p> <p>It makes John Laing the latest British company to be taken private as London-listed firms carry a discount to global peers, undermining the value of staying public, and private equity sees a chance for handsome returns.</p> <p>“Under private ownership and with flexible access to capital, John Laing can take a longer term view as an owner and operator of assets during the next phase of its growth,” <span class="caps">KKR</span>’s Co-Head of European Infrastructure Tara Davies said.</p> <p>John Laing shareholders will be entitled to 403 pence per share in cash, a premium of 27% to the stock’s close on May 5, the day before the company confirmed it was in takeover talks.</p> <p>Shares rose as much as 11.4% to 402 pence, just below the offer price. They have gained 22% in value this year.</p> <p>In March, it reported a loss before tax of 65 million pounds for the year ending Dec. 31, 2020, compared with a loss of 95 million pounds a year earlier.</p> <p>It could benefit as major economies, including the United States and the United Kingdom, invest heavily in infrastructure projects, with U.S. President Joe Biden pushing through a $2 trillion plan. </p> <p>“<span class="caps">KKR</span> is a strong partner, providing long-term capital and global expertise to accelerate John Laing’s strategy,” said John Laing Chairman Will Samuel.</p> <p>John Laing, which owns and develops infrastructure assets across the Americas, Australia and Europe, plans to recommend shareholders back the deal.</p> <p>It has invested in over 150 projects straddling transport, social infrastructure, the energy transition and digital infrastructure.</p> <p><span class="caps">KKR</span> said it has agreed to partner with infrastructure investor Equitix, which will buy a 50% stake in the British company’s existing asset portfolio.</p> <p>A source close to the deal, asking not to be named, said the company will continue to be operated from the United Kingdom by the existing management.</p> <p>($1 = 0.7046 pounds)</p> <p> (Reporting by Yadarisa Shabong in Bengaluru; Additional reporting by Abhinav Ramnarayan; Editing by Arun Koyyur and Barbara Lewis)</p> </body></p>