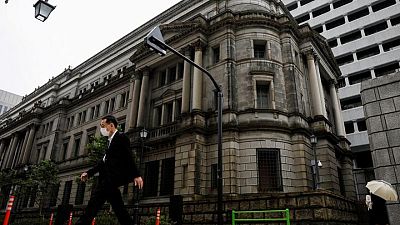 <p><body> <p>By Leika Kihara</p> <p><span class="caps">TOKYO</span> (Reuters) -The Bank of Japan will consider extending its pandemic-relief programme beyond the current September deadline if necessary, Governor Haruhiko Kuroda said as the country struggles with a spike in <span class="caps">COVID</span>-19 infections that is crippling the economy.</p> <p>Kuroda said the world’s third-largest economy remains on a path toward recovery as robust exports and corporate profits offset some of the pandemic’s damage to consumption.</p> <p>But he warned that there was high uncertainty about the pace of vaccine rollouts, which could inflict longer-than-expected pain on the economy.</p> <p>“For the time being, risks to Japan’s economic outlook are skewed to the downside,” Kuroda said in a speech delivered at a seminar on Wednesday.</p> <p>“Taken into account the impact of the pandemic, we will consider extending further” the deadline for the <span class="caps">BOJ</span>’s measures to ease corporate funding strains caused by the crisis, he said.</p> <p>The <span class="caps">BOJ</span> last year ramped up asset purchases and put in place a loan programme aimed at channeling money to cash-strapped small firms to cushion the blow from the health crisis.</p> <p>While big manufacturers benefiting from solid overseas demand have paid back some of the loans, small retailers remain under stress as curbs on activity to prevent the spread of the virus hurt consumption.</p> <p>With Japan lagging other major economies in containing the pandemic, many analysts expect the <span class="caps">BOJ</span> to decide on extending the programme either at next month’s meeting or in July.</p> <p>Japan’s economy shrank more than expected in the first quarter as a slow vaccine rollout and new <span class="caps">COVID</span>-19 infections hit consumption. Capital expenditure also fell unexpectedly and export growth slowed sharply.</p> <p>“Economic activity will remain below post-pandemic levels for the time being,” Kuroda said, pointing to a widening divergence among sectors on the pace of recovery.</p> <p>“The near-term focus would be to respond to the pandemic’s impact,” he added, suggesting that Japan would fall well behind other central banks in withdrawing crisis-response stimulus measures.</p> <p> (Reporting by Leika Kihara; Editing by Ritsuko Ando and Kim Coghill)</p> </body></p>