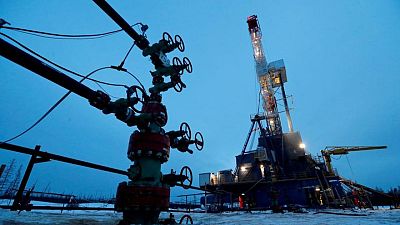 <p><body> <p>By Scott DiSavino</p> <p><span class="caps">NEW</span> <span class="caps">YORK</span> (Reuters) -Oil prices dropped over $2 a barrel on Wednesday to their lowest in three weeks, on worries that surging <span class="caps">COVID</span>-19 cases in Asia would dent demand for crude and that U.S. inflation fears could prompt the Federal Reserve to slow economic growth with interest rate hikes.</p> <p>Traders also cited rumors that the Iran nuclear talks were making progress, which could boost global crude supplies and depress prices. </p> <p>Brent <LCOc1> futures fell $2.05, or 3.0%, to settle at $66.66 a barrel, while U.S. West Texas Intermediate (<span class="caps">WTI</span>) crude fell $2.13, or 3.3%, to settle at $63.36. Earlier in the day, <span class="caps">WTI</span> was down more than 5%.</p> <p>That was the lowest close for both benchmarks since April 27.</p> <p>On Tuesday, Brent rose to a 10-week high over $70 a barrel in intraday trade on optimism oil demand would surge with the reopening of U.S. and European economies. It retreated on fears of slowing fuel demand in Asia where surging <span class="caps">COVID</span>-19 cases prompted new restrictions in India, Taiwan, Vietnam and Thailand.</p> <p>“The global picture for demand is probably the most divided it has been since the start of the pandemic, with an improving demand picture in the West versus a deteriorating outlook in Asia,” said Sophie Griffiths, market analyst with <span class="caps">OANDA</span>, noting the mixed picture fed volatility.</p> <p>Analysts have said Iran could provide about 1 million to 2 million barrels per day (bpd) in additional oil supply if a deal is struck.</p> <p>Russian Deputy Prime Minister Alexander Novak said oil prices were stable and the market had roughly balanced.</p> <p>Speculation the Fed might raise rates weighed on the outlook for economic growth and prompted investors to reduce exposure to oil and other commodities, bitcoin and other cryptocurrencies, and stocks.</p> <p>A “number” of Fed officials appeared ready to begin considering changes to monetary policy based on continued rapid progress in the economic recovery, according to minutes of the U.S. central bank’s April meeting. Data since then may have already changed the landscape.</p> <p>The U.S. dollar, meanwhile, gained against a basket of currencies a day after closing at its lowest since January. A stronger dollar can weigh on oil prices because it makes the commodity more expensive for holders of other currencies.</p> <p>Oil prices declined despite U.S. data showing a smaller-than-expected 1.3 million barrel build in crude inventories, a bigger-than-expected 2.0 million barrel decline in gasoline stockpiles and a 5% increase in gasoline use to pre-pandemic levels. [EIA/S]</p> <p>U.S. gasoline demand jumped to 9.2 million bpd last week, its highest since March 2020.</p> <p>“Given that people topped off tanks and filled garbage cans with gasoline (due to the Colonial Pipeline shutdown) … I expect the gasoline demand number to be pared next week,” said John Kilduff, partner at Again Capital <span class="caps">LLC</span> in New York, referring to the recent shutdown of Colonial’s oil products pipeline after a cyberattack.</p> <p> (Additional reporting by Laura Sanicola in New York, Noah Browning in London, Sonali Paul in Melbourne and Roslan Khasawneh in Singapore; Editing by Louise Heavens, David Evans, David Gregorio and Paul Simao)</p> </body></p>