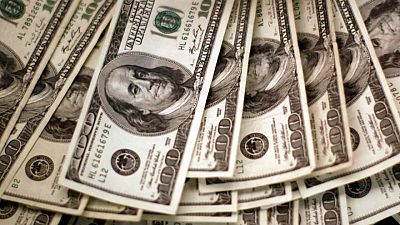 <p><body> <p>By Stephen Culp</p> <p><span class="caps">NEW</span> <span class="caps">YORK</span> (Reuters) – The dollar steadied amid a broad equity market sell-off on Wednesday, hovering near multi-month lows as market participants looked to the Fed for any change in nuance that could shed light on its monetary outlook.</p> <p>But cryptocurrencies took the spotlight, plunging in the wake of regulatory moves from China.</p> <p>“If there’s anything grabbing headlines at this hour it’s a crash in cryptocurrencies,” said Erik Bregar, head of FX strategy at Exchange Bank of Canada in Toronto. “That seems to be what everyone is focused on.”</p> <p>Bitcoin plunged to its lowest level since January in the wake of China’s decision to ban financial and payment institutions from providing digital currency services.</p> <p>Rival cryptocurrency Ethereum sank 28% to $2,444.</p> <p>Inflation pressures are mounting, with recent data showing the extent to which a supply/demand imbalance has caused prices to surge as materials producers struggle to keep pace with a reopening economy.</p> <p>That has aroused fears that the Federal Reserve could hike interest rates sooner than expected despite the central bank’s assurances that current price spikes are temporary.</p> <p>The dollar index, which measures the greenback against a basket of world currencies, was last flat at 89.795.</p> <p>The minutes from the Fed’s most recent meeting, due later on Wednesday, are widely expected to reiterate policymakers’ intention to stay the course and leave key interest rates near zero for the foreseeable future.</p> <p>Meanwhile, U.S. Treasury yields were little changed.</p> <p>“Prices tell us everything we need to know,” Bregar said. “The bond market is not expecting runaway inflation.</p> <p>“It’s going with Powell’s transitory outlook.”</p> <p>Pricing pressures are being felt elsewhere. UK inflation more than doubled in April to 1.5% from a month earlier, sparking similar concerns over longer-term inflation.</p> <p>The British pound eased 0.1% against the dollar to $1.4173.</p> <p>Canada also released its latest inflation data, which showed consumer prices jumping to an annual rate of 3.4%.</p> <p>The greenback gained 0.2% against the Canadian dollar to $1.208, but was still hovering near its weakest level since May 2015.</p> <p>The euro, which touched its highest against the dollar since the beginning of January, fueled by economic optimism, inched up 0.04% to $1.2229.</p> <p>The dollar fell 0.13% to 108.755 Japanese yen.</p> <p/> <p/> <p> (Reporting by Stephen Culp; Additional reporting by Julien Ponthus; Editing by Jan Harvey)</p> </body></p>