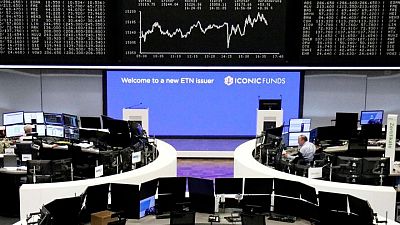 <p><body> <p>By Sruthi Shankar and Shreyashi Sanyal</p> <p>(Reuters) -European stocks posted their worst daily fall in one week on Wednesday, tracking weakness on Wall Street, as investors grew wary of rising inflationary pressures increasing the odds of an early tightening of monetary policy.</p> <p>The pan-European <span class="caps">STOXX</span> 600 index fell 1.5%, but was trading less than 2% below its all-time high. Miners, travel and technology stocks were the top decliners.</p> <p>A jump in regulated electricity and gas bills and clothing and footwear prices saw British consumer price inflation more than double in April, data showed on Wednesday.</p> <p>Central bank policymakers expect the surge to be temporary, but investors are worried that the price rises may last for a prolonged period, pushing central banks to counter it with policy tightening.</p> <p>“The worries that you see around inflation and long-bond yields starting to tick up, particularly in the U.S., are concerns on a global equity level and they will impact Europe,” said Aaron Barnfather, European equities portfolio manager at Lazard Asset Management.</p> <p>“But Europe has lot less risks because we haven’t performed as well, and from the quantitative easing point of view, the <span class="caps">ECB</span> has been clear that they will continue for some period of time.”</p> <p>European Central Bank chief Christine Lagarde said on Tuesday it was “essential that monetary and fiscal support are not withdrawn too soon.”</p> <p>Investors will be watching for more clues on inflation when the U.S. Federal Reserve releases its minutes from the latest policy meeting later on Wednesday. </p> <p>Meanwhile, bitcoin and ether tumbled to 3-1/2-month lows following China’s move a day ago to ban financial and payment institutions from providing cryptocurrency services.</p> <p>“The collapse across the entire realm of cryptocurrencies has many fearful of the economic implications of such capital destruction,” said Joshua Mahony, senior market analyst at IG.</p> <p>A volatility gauge of European equities rose to its highest in almost a week. </p> <p>Chip stocks came under pressure, with <span class="caps">ASM</span> International, <span class="caps">ASML</span> and Infineon Technologies each down more than 2% on concerns about a global semiconductor shortage. </p> <p>A report by the German Economic Institute showed bottlenecks in the supply of raw materials could cost Germany a rapid recovery from the economic impact of the coronavirus pandemic, with two-thirds of the sectors reporting supply constraints.</p> <p>European banks posted the smallest declines, helped by rising euro zone government bond yields. [US/] </p> <p>British infrastructure investor John Laing Group surged 11.2% after U.S. private equity firm <span class="caps">KKR</span> agreed to buy the company in a deal valued at about 2 billion pounds ($2.84 billion).</p> <p> (Reporting by Sruthi Shankar and Shreyashi Sanyal in Bengaluru; Editing by Arun Koyyur and Jonathan Oatis)</p> </body></p>