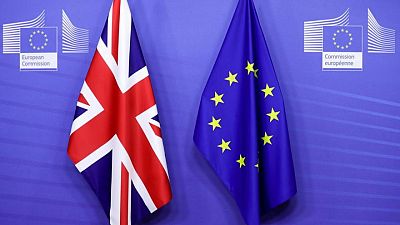 BRUSSELS (Reuters) -European Union leaders will urge Britain to respect the rights of their citizens after reports about travellers being detained at UK borders amid confusion over post-Brexit visa requirements, according to the draft of an EU summit statement.

There have been several media reports this month about EU citizens being detained, some for several days, at immigration centres in Britain after being denied entry.

With the end of freedom of movement following Britain’s exit from the bloc, EU citizens seeking entry to work or study are now subject to different rules. British and EU citizens still enjoy reciprocal visa-free travel for recreational purposes.

“The European Council calls on the UK to respect the principle of non-discrimination among member states and the rights of EU citizens,” said the draft for a summit of the EU’s 27 leaders next week, a copy of which was seen by Reuters.

Speaking in Rome, Italian Foreign Minister Luigi Di Maio said 12 Italians had recently been refused entry to Britain and detained ahead of their repatriation.

He told parliament such treatment was “disproportionate” and said Italy’s deputy foreign minister would go to London next week to discuss the situation with immigration officials. He also urged Britain to do more to raise awareness in the EU of new visa requirements.

“The British authorities undertook to… consider the possibility that, in future similar cases, they could let people enter British territory on bail until the time of their repatriation flight,” Di Maio said.

Dacian Ciolos, president of the European Parliament’s main liberal group, wrote to the European Commission last week to raise concerns about detention measures that posed “serious impediments” to relations between the EU and Britain.

“The detention of often young and low-risk EU citizens arriving in the UK for summer jobs and not being yet fully aware of new entry conditions is not in line with… the spirit of good cooperation that we would expect,” Ciolos wrote.

Britain’s Home Office (interior ministry) said that while international travel is disrupted by the COVID-19 pandemic, it would aim to grant immigration bail to those who have been refused entry into the country rather than detain them.

“We have updated our guidance to clarify that overseas nationals, including EU citizens, who have been refused entry to the UK and are awaiting removal should be granted immigration bail, where appropriate,” a Home Office spokeswoman said.

(Reporting by John Chalmers; Additional reporting by Crispian Balmer in Rome and by Andrew MacAskill in LondonEditing by Gareth Jones)