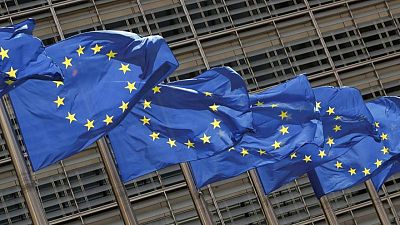 <p><body> <p>By Huw Jones</p> <p><span class="caps">LONDON</span> (Reuters) – It should be for clients to decide where they clear euro derivatives, though customers are ready to move business from London to Frankfurt if forced to by the European Union, bankers said on Wednesday.</p> <p>The London Stock Exchange’s <span class="caps">LCH</span> unit clears more than 90% of euro-denominated interest rates swaps, a market that helps companies guard against unexpected moves in borrowing costs.</p> <p>Permission for <span class="caps">LCH</span> to clear for customers in the bloc ends in June 2022 and Brussels wants euro business moved to Deutsche Boerse’s Eurex in Frankfurt to avoid relying on London.</p> <p>EU officials are discussing with banks what steps are needed to engineer a shift, but face concerns that splitting clearing would bump up costs.</p> <p>“The client decides where they want to trade and where they want to clear,” Robbert Booij, <span class="caps">CEO</span> for <span class="caps">ABM</span> <span class="caps">AMRO</span> clearing bank in Europe, told a Futures Industry Association event. “I am not so concerned about clients moving business, I am concerned about access being cut off.”</p> <p>Sabrina Wilson, a managing director at Citi, said clients were ready to clear in London and Frankfurt, but managing risk from two different books can be costly and tricky.</p> <p>Britain fully left the EU on Dec. 31, 2020. Swathes of trading in euro swaps have since left for the EU and New York, but clearing has so far stayed.</p> <p>“The bottom line is we haven’t seen a change in market behaviour,” Julien Jardelot, head of Europe government relations at London Stock Exchange. “EU firms need access to the rest of the world if they are to remain competitive both in euro and also in other currencies.”</p> <p>Eurex said the shift in clearing was a slow process.</p> <p>“Progress is definitely happening on that space, whether it’s fast enough to keep the EU authorities happy I’m not too sure,” said Philip Simons, Eurex’s global head of fixed income sales. “The market wants to see split liquidity pools because that is competition and choice.”</p> <p/> <p> (Reporting by Huw Jones; Editing by Alex Richardson)</p> </body></p>