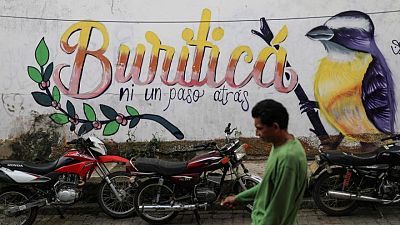 BURITICA, Colombia – When China’s Zijin Mining paid $1 billion to buy an extensive gold mine in the Colombian Andes in late 2019, security risks were a top concern, despite an operation by the military which had beat back illegal miners.

The company’s pre-deal jitters were warranted: illegal extraction by wildcat miners in tunnels either within or adjoining its concession has shot up since the operation’s end. Thousands of illegal miners are now working in difficult, sometimes-deadly conditions in dozens of tunnels and about 150 clandestine processing locations in Buritica municipality, local government and a specialized anti-illegal mining unit of the police told Reuters.

The tunnels are controlled by the Clan del Golfo crime gang, known locally as “The Ten” for the 10% cut they take off the illegal miners output. The Clan then buys remaining production, allowing miners to keep some gold or giving them cash or liquid mercury as payment.

The illicit operations pose a threat to the nearby community, which fears potential violence and the poisoning of the local watershed with mercury, used by the prospectors to separate out gold from mined dirt. They are also cutting into Zijin’s profits. Production at Zijin’s nearby mine is being “seriously affected” by the presence of the illegal miners, James Wang, chief executive of Zijin-Continental Gold, told Reuters in a video interview from the mine in northwestern Colombia. Losses in the first quarter amounted to 20% of total production, Wang said. The company has lowered its production target for the year to 200,000 ounces, down from an original 240,000 ounces.

“They occupy high grade areas, that’s the problem,” said Wang, adding the company never meets its output target of at least 500 kilos (17,640 ounces) per month because of illegal operations.

Zijin’s growing illegal extraction problem in Buritica is the latest test of Chinese miners’ ability to handle security concerns in Latin America, a region where companies have long grappled with wildcat miners, community tensions and crime.

Top metals consumer China relies on South America for a large proportion of its copper and zinc concentrate imports. State-run Chinese firms have also acquired stakes in mines in Peru and Ecuador to shore up supply. Zijin’s production losses in Buritica could dampen industry enthusiasm for Colombia, as it seeks investment in untapped deposits of gold, copper and other minerals.

The country is being roiled by sometimes deadly protests over inequality, poverty exacerbated by COVID-19 and police violence. “It’s really, really challenging to handle these areas. But you need a lot of engagement with government to take actions to control the regions,” Wang said. “It will take time.”

The government has offered “very strong support,” Wang said, but needs to “give more support and to implement law and order in the region.” He declined to say if that meant more military or police presence, saying it “depends on the situation.”

Neither Antioquia’s mining nor security secretaries would comment on the situation, while both the military and the anti-illegal mining police unit’s headquarters said they would have time to respond after protests end.

That police unit recently raided a secret underground processing room on the edge of Zijin’s concession, a trough along its floor draining away fine, mercury-spiked mud. Hidden nearby were four small bottles of the toxic silver liquid.Illegal miners can earn between $1,600 and $5,400 a month in a country where the minimum wage is about $270. But many others live in desperate poverty, hoping to strike it rich.

The tunnels can be deadly. Residents said some miners have been killed by errant dynamite explosions – their bodies returned to their families if they are local or buried on-site if not – but Reuters could not independently verify the stories.

Police operations against illegal mining win temporary gains at best, said community leader and formalized miner Fredy Diaz. “They go, they seize processing equipment, they burn motors, generators,” he said. “Gold creates so much wealth – if you burn my generator, I’ll buy another.”

Besides traffic in explosives, mercury and wood, brothels and drug addiction, the tunnels’ riches have created a population explosion. As many as 5,000 people have arrived from other parts of Antioquia province and further afield, attracted by the lure of illegal gold, nearly doubling the population, according to Buritica mayor Luis Hernando Graciano.

In comparison, Zijin employees from Buritica and other parts of western Antioquia number 635, accounting for about 45% of the company’s staff. The mayor said he worried word of illegal mining wealth could attract the National Liberation Army (ELN) rebels, potentially igniting violence. “There are other groups who also want to be part of this,” said Graciano. “And the fear we have is (the Clan) will fight with other groups and conflict will be created.”

Even as Zijin asks for tougher government steps to curtail illegal mining, Graciano and some formalized miners say the company itself could do more by allowing more local miners access to its concession under formalization contracts.

Though the contracts would not themselves push out the Clan, they offer employment alternatives and safer working conditions for miners, and are subject to environmental regulations. Six groups of miners – some 130 people – have obtained formal status, working parts of the concession and handing over 43% of their production as payment for use of Zijin’s title and its processing facilities. Zijin’s Wang said the company is looking at expanding its formalization program – but locals say it still faces challenges. Formalized miners sometimes have to abandon tunnels or avoid certain sites because of the presence of illegal miners and are vulnerable to accidentally linking up underground with illicit tunnels, said miner Hugo Valle. “It’s us, the legalized, who have to pay the price of the social and public order situation in a territory where (illegal) actors can’t be controlled,” he said.

“We can’t be the ones who directly confront this problem.”