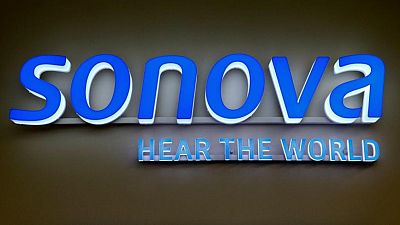 (Reuters) -Sonova Holding AG, the world’s biggest hearing aid maker, said on Tuesday it expected strong growth this year thanks to a wave of pent-up demand after the coronavirus pandemic and customers’ interest in its new products.

The pandemic initially hit hearing aid makers as restrictions and fears of infection deterred patients from seeing doctors or audiologists, but many have started to seek treatment again as they gained confidence in protective measures in stores.

“Nothing has changed at the fundamentals. People get older, have more money and want to be more active when they’re older,” Chief Executive Arnd Kaldowski told Reuters in an interview.

At the same time, the Switzerland-based group sees faster growth as it closed a number of smaller stores last year and each of its markets should see two to three months of increased activity as restrictions are lifted, Kaldowski said.

This was already evident in such countries as Britain and the United States and central Europe should follow the trend, he said.

Sonova expects its sales to grow 24%-28% and adjusted earnings before interest, taxes and amortisation (EBITA) to jump 34%-42% at constant currencies next year.

Over the last five years including 2020, Sonova’s annual revenue growth has ranged between 2% and 15%.

Shares in the company jumped 8.9% after the announcement.

In 2020-2021, the company launched products including the hearing aid Phonak Paradise, which can be connected with voice assistants such as Siri, and said it would buy the consumer unit of German headphone maker Sennheiser to reach younger customers who already use in-ear devices to listen to music and answer phone calls.

However, Sonova said gains from the acquisition – which should close in the second half of 2021 – were not included in the new guidance.

(Reporting by Zuzanna Szymanska in Gdansk; Editing by Christopher Cushing and Subhranshu Sahu)