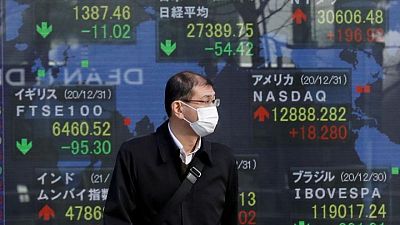 NEWYORK (Reuters) – Stock indexes edged lower globally on Monday, with technology shares weighing the most on the benchmark U.S. S&P 500 index, while gold prices hit their highest in more than three months as investors sought safety.

U.S. Treasury yields, however, traded little changed even after a report showing the highest prices ever paid in a May manufacturing survey for New York State.

The S&P 500 technology sector was down 0.7% and the biggest drag on the benchmark index. Wall Street’s declines also follow the S&P 500’s biggest one-day jump in more than a month on Friday.

While the week is expected to be relatively quiet for economic data, investors will be anxious to see minutes on Wednesday from the Federal Reserve’s policy meeting last month, which could shed more light on the policymakers’ outlook on an economic rebound.

“The Fed has been pretty consistent in its message that it’s going to be quite tolerant of inflation, it’s not going to cause them to raise rates prematurely or pull back on asset purchases,” Simons said.

The spread of the coronavirus was also a drag in some markets, with Singapore reporting the highest number of local infections in months and Taiwan seeing a spike in cases.

Bitcoin dropped to a three-month low after Tesla Inc boss Elon Musk suggested over the weekend that the electric automaker may have already sold some of its holdings in the digital currency.