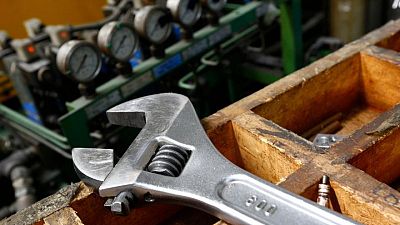 <p><body> <p><span class="caps">LONDON</span> (Reuters) – Nearly half of smaller British manufacturers expect to recover to their pre-pandemic health in the coming months, with investment and hiring plans on the rise, a survey showed on Monday.</p> <p>Business support groups South West Manufacturing Advisory Service (<span class="caps">SWMAS</span>) and Manufacturing Growth Programme said 48% of small and medium-sized manufacturers expected to meet or surpass their pre-<span class="caps">COVID</span> position in the next three months.</p> <p>The survey adds to other signs that a wave of optimism has swept British companies as the economy gradually reopens following a third national coronavirus lockdown.</p> <p>Prime Minister Boris Johnson allowed non-essential shops to reopen and outdoor hospitality to resume in April in England and there have been signs that the economy accelerated in response.</p> <p>Further relaxations are due to take place this week before almost all remaining restrictions are lifted in late June, assuming the number of new <span class="caps">COVID</span> cases remains low.</p> <p>“<span class="caps">SME</span> manufacturers are definitely feeling confident about the future, but there will still be a lot of challenges to overcome, not least the availability and lead times of material,” said Martin Coats, managing director of <span class="caps">MGP</span>.</p> <p>Some 58% of the companies surveyed said they planned to raise investment over the next six months, while 54% intend to recruit more staff, the survey showed.</p> <p>The survey of just under 300 companies was conducted between April 12 and April 23.</p> <p/> <p> (Reporting by Andy Bruce, editing by David Milliken)</p> </body></p>