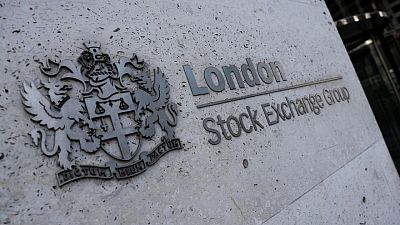 (Reuters) -London’s FTSE 100 rose on Friday, but was on track to post its worst weekly performance since February on inflation worries, while Sanne Group topped the mid-cap index after rejecting a $1.90 billion buyout proposal.

The blue-chip index rose 0.6%, with software company Sage Group adding 3.1% after reporting strong first-half organic recurring revenue and forecasting annual growth at the top end of its 3% to 5% range. The index is down 1.6% for the week, its biggest weekly fall since February.

Banks and large dollar earning consumer staples companies were among the biggest boosts to the index.

Spirits maker Diageo rose 1.8% after brokerages raised their price targets on the stock.

In global markets, shares snapped a three-day decline, reflecting an overnight revival on Wall Street, as Federal Reserve officials reiterated that price pressures from the reopening of the economy would prove transitory. [MKTS/GLOB]

“The Fed are seemingly doubling down on the transitory inflation message which will help the market in the short-term but creates more asset price risk if they are forced to admit that there is a permanence to some of the inflation further down the road,” Deutsche Bank strategist Jim Reid wrote in a note.

After rising nearly 11% this year on reopening optimism, the FTSE 100 has pared some of those gains in the last few sessions on worries that central banks might tighten their ultra-loose monetary policies sooner than expected to curb inflation.

Prime Minister Boris Johnson has set out what he describes as a “cautious but irreversible” route out of lockdown for England, starting next week. He has, however, warned that new variants could derail that.

“The markets kind of looking through this now even if there are regional variants and maybe some delays. What’s driving UK risk exposure is the much more promising economic data we’ve had in the last couple of months,” said Ian Williams, economics and strategy research analyst at Peel Hunt.

(Reporting by Devik Jain in Bengaluru; Editing by Anil D’Silva)