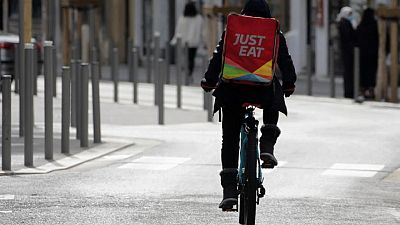 AMSTERDAM (Reuters) – Just Eat Takeaway.com, Europe’s largest food ordering and delivery company, said on Wednesday it would launch a supermarket delivery service in Germany and is considering doing the same in other markets.

The company said its Lieferando service, which operates in 50 German cities, would now also offer groceries.

Lieferando “intends to run its grocery business at gross profit neutral,” Takeaway said in a statement.

“Just Eat Takeaway.com is also investigating a similar approach in other key markets such as the UK and the Netherlands.”

Shares in the company were down 3.7% at 76.44 euros on news competitor Delivery Hero is re-entering the German food delivery market in Berlin.

Takeaway reported a net loss of 151 million euros for 2020 and said it intends to sacrifice profitability to win market share in 2021.