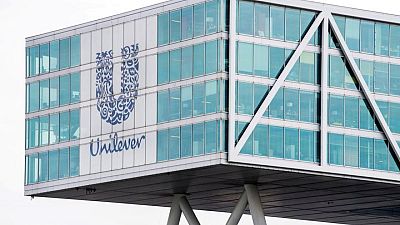 (Reuters) – British consumer goods giant Unilever on Wednesday said an overwhelming majority of its shareholders voted in favour of its plan to reduce greenhouse gas emissions across its supply chain to net zero by 2039.

The maker of Dove soaps and Hellmann’s mayonnaise is the largest company globally to give investors a say on its climate transition action plan.

It said over 99% of shareholders who voted, voted in favour of the non-binding resolution, which was released during an online shareholder meeting.

It will first eliminate emissions to net zero within its own operations and halve the impact of its products across its supply chain, compared to 2010 levels, by 2030.

The pathway to achieving these goals will come by focusing on reducing emissions associated with its business and products towards zero “as far as possible,” rather than purchasing and retiring carbon credits, the company said in its “climate transition action plan https://www.unilever.com/Images/unilever-climate-transition-action-plan-19032021_tcm244-560179_en.pdf” shared with shareholders ahead of the vote.

Shareholders in companies from oil and transport to food and drink have been pressing executives to detail how they plan to reduce their carbon footprints in coming years, in line with government pledges to cut emissions to net zero by 2050.

Unilever shares were up 0.5% in afternoon trading.

(Reporting by Siddharth Cavale in Bengaluru; Editing by Kirsten Donovan and Estelle Shirbon)