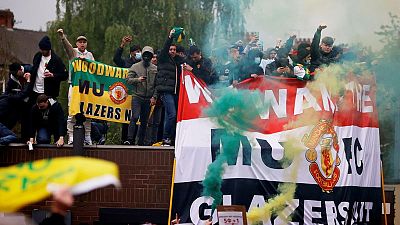 MANCHESTER, England (Reuters) – Manchester United’s leading fan group has called on the club’s American owners to open a share scheme to allow supporters to buy out the Glazer family’s shares in the club.

The statement from the Manchester United Supporters Trust (MUST) was issued after fan protests led to Sunday’s match against Liverpool being postponed.

In an open letter to club co-chairman Joel Glazer, MUST called on Glazer to “put in place a share scheme that is accessible to all and that has shares with the same voting rights as those held by the Glazer family”.

“Should the appetite be there amongst fans then you should welcome, and offer no opposition to, the Glazer Family shareholding being reduced to a minority or indeed being bought out altogether.”

United were bought by Malcolm Glazer in 2005 and faced opposition from fans from the outset, with the leveraged nature of the deal the focus of criticism.

Following Malcolm Glazer’s death in 2014, co-chairman Joel took on the leadership role at the club and played a prominent part in the recent Super League controversy – he was named the short-lived breakaway’s founding vice-chairman.

That affair has relit the always smouldering protest movement amongst United fans with a fan demonstration at the club’s training ground followed by Sunday’s protests which involved clashes with police.

Glazer has apologised for the club’s involvement in the Super League project, which would have seen 12 of the top clubs in Europe breakaway from the established structures to create a privately owned championship.

But MUST said they did not accept the apology.

The four-point plan also called on the club to engage with the British government’s review of the sport’s governance and “use this as an opportunity to rebalance the current ownership structure in the favour of supporters”.

MUST also demanded independent directors be immediately appointed to the club’s board to “protect the interest of the club as a football club, not its shareholders” and called for consultation with season ticket holders on any future changes “including the competitions we play in”

The letter concluded: “We request a response to this 4 point plan, in public and in writing, by Friday. This is the only way to move this issue on. We strongly suggest you take it.”

United did not immediately respond to a request for comment.