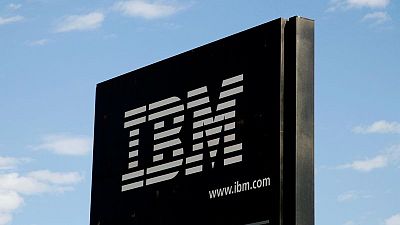 NEWYORK (Reuters) -IBM said on Thursday it has agreed to acquire Turbonomic, a provider of software that helps companies monitor the performance of their business applications, the latest in a series of cloud computing acquisitions by the tech giant.

The deal, which confirmed an earlier Reuters report, would be IBM’s largest since it acquired Red Hat for $34 billion in 2019. It values Turbonomic at between $1.5 billion and $2 billion, people familiar with the matter said on condition of anonymity.

IBM shares were up slightly in early afternoon trading.

The acquisition is IBM’s 11th since Arvind Krishna became chief executive last year. Krishna has been leading a major transformation, doubling down on the hybrid cloud and artificial intelligence areas.

Boston-based Turbonomic provides companies with software to boost the real-time performance and compliance of their applications. It last raised $70 million from Trend Forward Capital and Highland Capital Partners at a valuation of $963 million in September 2019, according to PitchBook Data. Other backers of the company include Bain Capital Ventures and Cisco.

Turbonomic reported 41% revenue growth for the 2021 fiscal year, as it benefited from customers accelerating their application transformation to the public cloud during the coronavirus pandemic.

Turbonomic has previously partnered with IBM, including an original equipment manufacturer (OEM) agreement in May 2020.

Following the closing of the transaction, IBM plans to integrate Turbonomic’s Application Resource Management software with Instana and its other recent acquisitions.