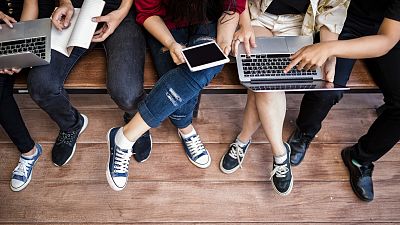 Students will soon be able to pay for their tuition with cryptocurrency in Romania.   -   Copyright  Getty Images via Canva
By David Walsh  •  Updated: 15/04/2021

More than 11,000 students in Romania will be able to use cryptocurrency to pay their university tuition fees for the first time from July.

The Lucian Blaga University of Sibiu (ULBS) will become the first higher education institution in the country to offer the payment option when admissions begin for the next academic year this summer.

The move comes following a partnership between the university and a Sibiu-based start-up called Elrond.

Founded by a local team of researchers, entrepreneurs and programmers, Elrond is looking to make improve on existing blockchain platforms like Bitcoin and Ethereum, including using average computers instead of high energy processors.

Virtual currency payments to the university will be made in Elrond, or EGLD, a cryptocurrency developed by the start-up.

As well as supporting local entrepreneurs, the university said was also looking to streamline administrative processes through digitalisation.

Speaking to Euronews, the university's Vice-Rector for Administration and Organisational Development, Professor Adrian Pascu, said ULBS was more interested in the benefits of blockchain than cryptocurrencies themselves.

"We believe that the universities are at the forefront of research in any field and that the latest technologies are developed and must be validated by scientists affiliated with such institutions," he said.

"We do not support a specific virtual currency, yet we support the blockchain technology, which can be used not only for cryptocurrencies but in other areas, too, such as data encryption.

"We chose as a first step the partnership with Elrond because it is a local start-up, Lucian Blaga University graduates had been involved in its development, and our university supports entrepreneurship.

"It is a pilot project and, if it turns out to be a successful one, we will look into the possibility of offering our students the opportunity to pay tuition and administrative fees via cryptocurrency, and perhaps other digital currencies, too.

"This, however, does not mean that LBUS aims to turn into a player in the virtual currency market".

Under the news plans, ULBS will convert EGLD tokens into Romanian Lei through a payment processor at no extra charge for students and avoiding traditional bank charges.

While cryptocurrencies are notoriously volatile, the potential benefits using EGLD tokens to pay for tuition may prove attractive to a growing number of students in the future, not least because of low transaction costs and public verification of payments through blockchain technology.

"So far, the feedback is positive. Young people tend to embrace new gadgets as soon as they are released, and the latest technologies are not unfamiliar to them. In fact, many of them choose to invest in digital currencies," Pascu told Euronews.

"As far as this project is concerned, we will be able to draw clearer conclusions after the end of this year’s college application deadline, when we assess the extent to which virtual currency was used in covering related expenses.

"Then, we will be able to decide where this payment method could be implemented next".

In a statement, Beniamin Mincu, CEO of Elrond, said: "We recognise the great potential of ULBS students. Many of the Elrond team members are graduates of this university, some of them are currently associate professors of ULBS.

"We are pleased that through this collaboration we can offer students access to a technology that promises to have a significant positive impact on today's society, but also on the next generation of graduates of the Sibian university and beyond".