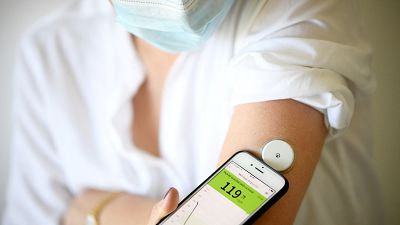 A woman with diabetes uses a glucometer to measure the glycemia in her blood. File picture.   -   Copyright  FRANCK FIFE/AFP
By Pascale Davies  •  Updated: 12/05/2021

The coronavirus pandemic has been at the forefront of the health agenda for more than a year but another epidemic has been starring us in the face for several decades and is arguably an even bigger worry: diabetes.

The World Health Organization estimates it affects 422 million (1 in 11 adults) worldwide, which compared to coronavirus infections, diabetes affects three times as many people.

The figure for people living with diabetes is expected to rise to 700 million worldwide by 2045.

Diabetes “is already a full-blown epidemic of such dynamics that the number of people with diabetes has almost quadrupled in the last 30 years”, Dr Gojka Roglic, the medical officer for diabetes management at the World Health Organization told Euronews.

The chronic disease has entered the WHO's top 10 causes of death, following a significant percentage increase of 70% since 2000.

The non-communicable disease not only increases the risk of premature death, but can also cause strokes, blindness, heart attacks, kidney failure and amputation.

It is well known that diet and lifestyle can play a huge role in Type 2 diabetes but the disease is much more complex.

For starters, there are 14 types of diabetes, which occurs when the body’s ability to produce or respond to the hormone insulin is impaired. Type 1 and type 2 are the most common and there is also gestational diabetes, which can develop briefly during pregnancy.

Type 1 is an auto-immune condition where the body cannot produce enough insulin and often affects children. The reasons why it develops are not fully understood.

Type 2 diabetes is where the body can produce insulin but cannot use it well. It develops with age and can be caused by genetics and lifestyle. This type is responsible for 90% of diabetes cases but there are solutions to control it.

The main risk factors for type 2 are aging, obesity and physical inactivity, Dr Roglic said, but she stressed “these risk factors are not easy to tackle or to control…because despite being conceptually simple, they're not easy to implement.”

But she said there is a lot governments can do such as how they plan cities, education, transport and food policies, such as sugar taxes.

On April 14, the same day insulin was discovered 100 years ago, the WHO will roll out a diabetes agenda called the Global Diabetes Compact, which will support countries in implementing programmes, focus on reducing obesity and aims to improve access to medicines and technologies, particularly to low and middle-income countries.

Raising awareness is key as many people do not know they have diabetes until it is too late.

“We have like an iceberg of diabetes floating in Europe, we have this big under the water group that who don't know they have it,” Professor Chantal Mathieu, chair of the European Diabetes Forum told Euronews.

Professor Mathieu said as diabetes can present no symptoms in the beginning, many people only seek treatment when they have already destroyed their kidneys and need dialysis.

To do so, she said improved data collection and sharing, better access to health care, advising policy makers and novel technologies are needed.

Diabetes is invasive to your everyday life. It demands you treat yourself with pills or insulin and you need to monitor your glucose levels and blood pressure.

Traditionally, this involves pricking your finger daily, which is time-consuming and can be painful.

But technology has stepped up in recent years and smart glucose sensors have made diabetes care easier.

The current leader on the market is the FreeStyle Libre by American medical company Abbott. It is used by three million people in over 50 counties.

The small circular sensor sticks to the back of the upper arm, which is then scanned with your smartphone to get a glucose reading.

One of the reasons it has become popular is not just for ease of use but also because it allows people to better control their health.

“As soon as people see information, e.g. their glucose levels going up or down after taking certain food, they make changes,” he told Euronews.

The data can also be shared securely with doctors for telehealth appointments. This has become more important for diabetes patients since the coronavirus pandemic because diabetics are generally more vulnerable to the dangers of Covid-19.

“Pairing widespread telehealth with sensor-based technologies could transform the way we treat the condition – also long after the pandemic passes,” Resch said.

‘Too expensive and too few’ solutions for all

Despite the FreeStlye Libre being cheaper than other similar products, starting from around €111, and being fully or partially reimbursed by some healthcare systems, not everyone can afford it and even the traditional finger-pricking devices can be too expensive for some.

Other medicines and technologies for diabetes care are evolving. Some of the newer technologies include closed-loop/artificial pancreas systems, which constantly measure your blood glucose and regulate your insulin level with little input required from people living with diabetes.

“But they are not as yet widely available or accessible to the majority of people,” said Sabine Dupont, a senior consultant at the European division of the International Diabetes Federation.

There are many issues in access to technologies and medicines and that are not just due to cost.

Other important factors are how to evaluate the benefits of newer technologies to determine reimbursement. Discussions between manufacturers, payers and health system also need to take place at a European level to ensure citizens have full access to medicines and technologies.

“I think one of the barriers is that innovation is still very often considered a cost rather than an opportunity,” she told Euronews.

More transparent procurement mechanisms are also needed, she said, because it can take time for new medicines and technologies to arrive on the market. There are also huge disparities as to when the same new medicine/technology becomes available in all European countries.

This is partly because after new medicines/technologies have been approved for use at the European level, it can take even more time to go through further approval at a national level to obtain reimbursement.

But if these issues were ironed out, living with diabetes could be made much simpler.

“If you have access and affordable access to the required medicines and technologies, you can actually live a very healthy life with diabetes,” Dupont said.