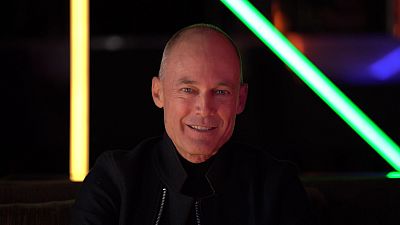 I have met Bertrand Piccard a couple of times previously for short interviews and have always wanted to delve deeper into his life which is so rich in excitement and achievement. I was delighted to have the opportunity to do so for Disrupted. We met up in his hometown of Lausanne.

It was a grey damp day when we met. Bertrand Piccard strolled in dressed in black, looking more like a high class architect than a world renowned explorer. His piercing blue eyes sparkle with an intensity I have rarely encountered, his enthusiasm captivated myself and the crew at our shoot. What’s more, he is a good talker and a likeable fellow.

Adventure is in Bertrand Piccard’s blood. His father and grandfather were both renowned explorers; his role models he tells me were “astronauts, explorers, divers, environmentalists”.

He identifies immediately with the premise of the programme as for him, disruption is at the heart of who he is. Being an explorer, he tells me, “is the desire to be disruptive. An explorer is somebody who is not satisfied with the status quo, with what he sees, with what he has.”

Piccard’s first major endeavour was a record breaking flight around the world in a hot air balloon: “It was 20 days non-stop in the air, 45,000 kilometres, the longest flight ever in the entire history of aviation.” It was a journey that could have ended in failure, at worst death. “We landed with 40 kilos of liquid propane out of the 3700 kilos I had at the start. So I thought, if I want to do better, I have to change this paradigm. I have to be disruptive again and do something without fuel.”

That was how the idea of Solar Impulse was born. Bertrand Picard teamed up with André Borschberg, a pilot, engineer and fellow Swiss explorer. It took more than 10 years to come up with a viable aircraft powered only by the sun, a feat nearly every aviation expert had written off as impossible. In 2015 they took off for a 42,000 km journey. 505 days later they had made it around the world.

The historic flight was not only fuelled by the sun, but by a driving imperative to prove to the world the full potential of environmentally sound technologies. “I wanted to prove that clean technologies and renewable energies could achieve the impossible, this is basically what I wanted to show and the disruption of having a solar powered aeroplane flying without fuel at night with solar energy”.

The voyage also taught Piccard about himself - “I learned to be perseverant because I was very impatient in the past when I was younger and Solar Impulse was three times longer than I thought and five times more expensive. So I had to really work it hard to succeed. I learnt that you should never be afraid to fail.”

However, despite the important symbolic impact of the achievement, Piccard is aware that in practical terms, solar power cannot provide immediate solutions to commercial air travel. “Solar Impulse was 72 metres in wingspan, flying 45 kilometres an hour with only one person on board. This is how we had enough energy from the sun to be able to fly. This is not very practical for 200 passengers. (...) On an Airbus 380, I think if all the wings were covered with solar cells, it would only give the energy for the entertainment on board.”

Bertrand Piccard has now moved onto a new chapter of exploration and possibly his biggest and most daunting to date. He has moved from one adventure to 1000. Piccard wants to change the world by making it cleaner and the premise is simple. With his foundation, he is selecting 1000 solutions that can protect the environment and be profitable at the same time. Once he has his portfolio, he will head around the world, a third time, to present the solutions to decision-makers and world leaders, who he says have so far been highly receptive to his work. “Everybody has environmental targets today, carbon neutral in 2040 or 2050, but nobody has the clue how to do it. What I want to show is that all these solutions already exist, it can be in little start-ups, big corporations, multinationals. Altogether, there are hundreds and hundreds of these solutions that can be used to reach more ambitious environmental policies and energy targets.”

Piccard is nearly there. He has found and labelled more than 800 initiatives so far and aims to reach his goal of 1000 by early 2021. He was happy to share some of the solutions that have been labelled with me. “You have the ones that are saving water, helping to purify water, you have the way to make energy with waves, you have the way to insulate buildings, much better to have smart buildings, to have heat pumps. You have the way to have much cheaper solar energy, costing one fourth of the cost of electricity made by oil, gas or coal or nuclear power. You have systems to make cars much cleaner, a little module that you install on your engine for 500 dollars and it saves 20 percent of the fuel and cuts 80 percent of the toxic particles that are emitted.”

That's why we urge #EUCO to endorse 55% 2030 climate ambition. It makes sense in every way.

“You create jobs, you make money replacing what is polluting by what is protecting the environment. Today, with all the billions of euros and dollars flooding on the market for the recovery of the COVID crisis, it's the perfect moment to replace the infrastructures, to go into much more modern systems that pay for themselves. This is how we will create jobs and make money*.

As he explains it, his plan seems like a no-brainer. For Piccard it is nothing short of a miracle. “People are waiting for one solution that makes the miracle. The miracle is that there are so many solutions that each have some little result and all together you change the world, you change technology, you change the protection of the environment.”

For more on Bertrand Piccard, watch the media player above.

This man thinks he has the answer to sustainable, inclusive motorsport