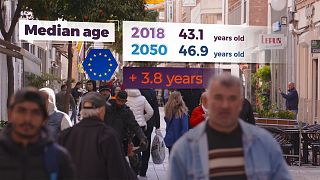 Europe's ageing population is a demographic phenomenon which sees a decrease both in fertility and in mortality rate and a higher life expectancy among European populations.

And the 'greying of Europe' looks set to have a significant impact on most aspects of society and the economy.

"I think we live in a situation where we have a lot of challenges linked to the technological developments and the population ageing both in general and also the workforce," says Deputy Director-General of the EU Commission, DG Employment Andriana Sukova.

"So we need to act. We need to use the funds for helping people…we need to help them find and face new job opportunities but also be ready for new working relations."

After the financial crisis that hit the country in 2012, Cyprus has regained a positive growth. However, many workers remain unemployed – especially those over 50 years old.

The European Social Fund finances projects that aim to integrate and maintain older workers into the labour market.

For instance, the program 'Aid Scheme' encourages Cypriot employers to hire full-time people over 50 years-old, by covering a part of their salary.

Quality Manager, Paolo Patitucci was working for an airline when a social plan forced him to quit his company at the age of 60.

Since then, he found a new job in a transport company in Nicosia. A stable job that he was able to keep.

"In my case, the employer was offered the scheme by the government and that’s how I continued working for the company."

"After my old company stopped a lot of my colleagues had very big difficulties in finding a job."

"So this scheme was helpful for persons like these."

Over the last 3 years, Aid Scheme has been helping around 1200 people over 50 years old to find a job, according to the European Commission.

But this was not the case for Elena Charalambous Valianti, who was an accountant for 26 years.

She decided to start her own business, due to a lack of good job opportunities.

This is a growing challenge for Europe. The median age of the EU should rise up to almost 4 years, to reach nearly 47 years old in 2050.

It could even rise by up to 8 years in Cyprus, and also in Malta, Poland and Slovakia.

"People over 50 normally are not the target group approached for the majority of employers, workers are not able to change their main skills that’s why we give emphasis in training and retraining in order to make those people able to re-enter the labour market," says Andreas Matsas, General Secretary, The Cyprus Workers' Confederation.

The impact of the ageing demographic on the economy

Nobel Prize-Winning Economist Christopher Pissarides says there are demographic imbalances between north and south and these are an outcome of more fundamental underlying forces:

"For example, if you look at various studies that were done on how ready European countries are to take on the new technology, there is a huge gap between the north and the south."

"You have the Scandinavians and Germany being more than prepared to take on any kind of new technologies that we have, they are doing a lot on R&D providing the infrastructure and you look at the South and maybe one or two things are there, it’s more likely that they haven’t done anything yet."

"That’s what is going to happen in the next 10 to 20 years. Divergence is going to increase more."

How can this practically affect public finances?

"So we have to be very careful about how we plan it in relation to the private sector and the public sector. The pension system is entirely depending on the policies."

"In the past, pensions in many countries were planned without the view to what it’s going to happen in the future forgetting that when someone enters the labour force and is signed up to a pensions’ scheme, that will be an operation for the next forty years."

"So we have to rethink on how we treat work beyond retirement age, which is sometimes in the sixties and how we do it conditional on the healthy age expectancy."

"We need to be very careful about technology and make sure that we have the infrastructure for the application of digital technologies throughout Europe and not leave it entirely in national hands because we know that if we leave it there, some countries and especially those that are currently very advanced should go up even more," says Pissarides.

"We need to reform our pension systems and change them to funded pensions at the very least."

"We need to take care of the overcrowding of our cities, of our environment, of congestion and we need to act together on developments that could break up the unity and the cohesion of the EU."

"Technology is one but immigration is a huge issue that we are now slipping under the carpet because we don’t know what to do basically but sooner or later we are going to face the music.

Younger people across Europe could be working into their 70s

The future of work: are your skills up to date?